There were crazy mosquitos on the north side of Avalanche Pass. As soon as we were out of our tents in the morning, we hurriedly packed up in order to escape them. It was a rude awakening for me, who had gotten very blasé about the critters, based on my Muir Trail hike last year, where I could count the number of mosquito encounters on the fingers of one hand. Now there were 20 on each arm and swooping in on my face and neck. I occasionally inhaled one. Not fun! The only thing to do was to keep moving through them, hoping they would dissipate as we climbed higher. The mosquitos seemed to prefer me to Barbara, which made her happy (not me so much).

a lovely juniper at the top of Avalanche Pass

We slowly climbed toward the pass, and were suddenly there sooner than I had anticipated. It’s a wooded pass, at 10,013′ elevation. We should have lazed around at the top longer, as we descended into another cloud of mosquitos and had to keep moving.

Barbara on Avalanche Pass, our high point so far

As we descended from the pass, we walked along a beautiful somewhat marshy (read “mosquito-rich”) drainage, full of wildflowers. I kept thinking I would take photos of them all, but the bugs kept me moving. No people in sight, no fresh footprints on the trail. However, we did come across some fairly fresh evidence of bears.

Nice bear scat! My hand is there for size comparison. We saw lots of this, but so far, no bears.

Here are a few of the flowers that graced our trail. The entire mountains were exploding with blossoms!

Above Moraine Creek, on a south-facing slope where the mosquitos seem to have disappeared, we stopped for our hot meal at about 1:00 PM. We ate a backpacker pre-packaged meal of “chicken risotto,” which I DO NOT recommend. Plus, there was so much of it.

We stopped at little Moraine Creek where the trail crossed, and  took a break to bathe in the last running water we’d have today. There wasn’t anybody around, and the place was ours completely. It felt so good to rinse off the salt and grit, and dunk my head in the cool water. The sky was mostly sunny, though little clouds would pass overhead on occasion and spit raindrops at us. We had decided to camp high on Moraine Ridge, to escape the mosquitos we felt certain would be waiting us at Roaring River.

Stormy weather threatened as we walked through an old fire area.

There was rain off and on for a few hours in the afternoon. Now, at 4:00 PM, we are already camped for the night, overlooking Roaring River and with a great view of tomorrow’s hike, up Deadman Canyon. We haven’t seen another person in 27 hours, and that one was just at a distance at the Sphinx Creek campground. We don’t expect to see anyone until we hit the Roaring River ranger station tomorrow morning.

Looking back the way we came.

Looking ahead to the ominously-named Deadman Canyon

I saw a Clark’s Nutcracker today, and heard more of them, making a racket in the trees. I know we’re in the mountains now! l also saw a Ruby-crowned Kinglet, flitting among the low-lying shrubs and flashing his red crest. And of course, the ubiquitous juncos, robins and jays, which are everywhere.

Sharing the Earth with the “real” ants

Barbara is doing great, but has blisters on both baby toes. Very painful. She didn’t stop and wrap them soon enough, so we stopped, drained the blisters, wiped with alcohol swabs and bandaged. I hope they are better tomorrow! A blister can wreck a hike really quickly!

Every moment, the light is changing on the glacier-scoured sides of Deadman Canyon as clouds gather and move and the sun appears and is obscured. So quiet, except for a few birds. Actually, quite a few birds–just not really close by. Our camp appears to be in a manicured park-like setting; tall Ponderosa pines and very little undergrowth. Dry and with nice level tent sites. I feel lucky! 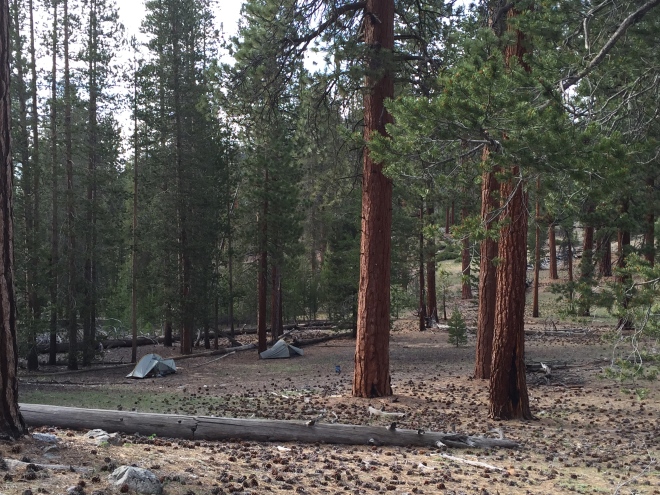