Went to bed early last night, about 8:00 PM. At a little before 10:00, I was awakened by the full moon’s light filtering through the Ponderosas. Three very loud jets chose that time to fly overhead, from the nearby air force base, I guess. I had heard stories of fighter pilots practicing flying up and down the canyons of Kings Canyon National Park, but for some reason, I thought that they had stopped doing that. I guess not… 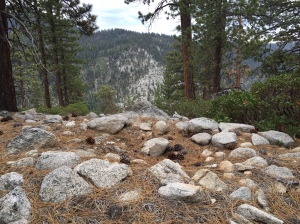 Remains of Native American encampment. You can’t really see the rock-lined indentation, but I know it’s there.

I woke again at 2:00 and at 4:00 and finally got up at 5:30. Babz and I had our breakfast of oatmeal and tea (just like John Muir!), and hit the trail at around 7:00 AM, heading over the lip of Moraine Ridge and down to Roaring River. Before we headed out, I discovered the remains of a couple of old Native American storage pits, shallow round indentations lined with rocks, perched on the lip of the ridge. I certainly can see why they would choose this area as a camp! 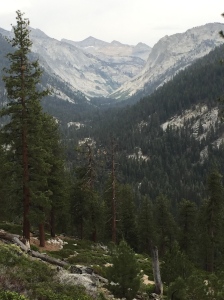 A view of where we’re headed, as we take the trail down from Moraine Ridge

The day started with a high overcast and a muggy feeling in the air. We got down to Roaring River, and were glad that we chose to stay higher: there were people everywhere, and riders with mules loaded with chain saws and such, going off to do trail maintenance. Very busy! The ranger was listening to the weather report, and told us thunderstorms were forecast on Elizabeth Pass. We pressed on. Once we started up Deadman Canyon, it started to rain steadily, from about 9:00 AM until now (2:00 PM), where I am huddled in my tent at Upper Ranger Meadow. It’s a beautiful spot, but then again, it’s all beautiful. 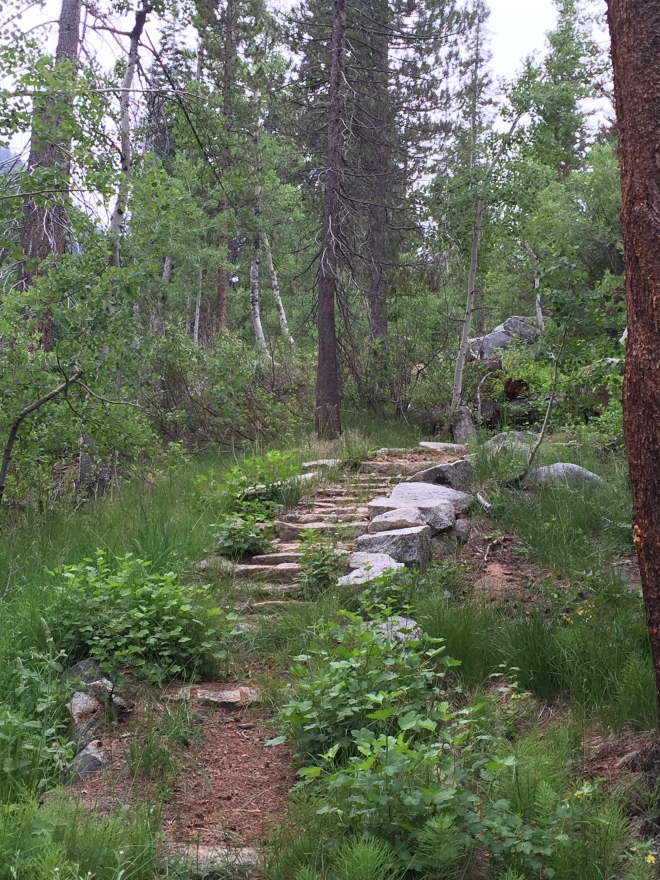 Babz is walking slowly, but seems to be enjoying herself. I am loving it, rain and all. The bugs (mostly mosquitos) kept us going until now.  Finally, the rain seems to be abating. Thunder is rolling far off in the peaks.If it doesn’t clear, we are thinking we may need to spend another day here, which would probably mean that I miss Peter Rowan’s birthday party. But we have plenty of food and will be fine. 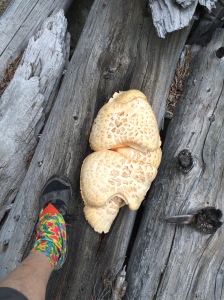 A large fungus. So puffy and light-looking that I just had to climb up on the fallen logs to get a photo.

Fungi were profuse at the mouth of Deadman Canyon. Must be the rain! 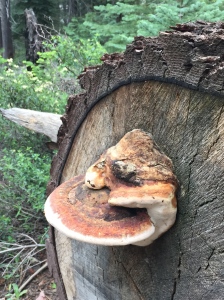 Sprouting life out of death.

Getting water today in the creek, I slipped and tumbled and lost my water filter, which Babz quickly rescued, though she had to get her boots wet. Lesson: remove pack before hunkering down on wet rocks. Luckily, everything stayed dry in my pack. It was a funny feeling, like an overturned beetle maybe, to be clawing at the air as my feet slipped out from under me and I fell sideways into the running water. All slow-motion.

The creek where I took a tumble. 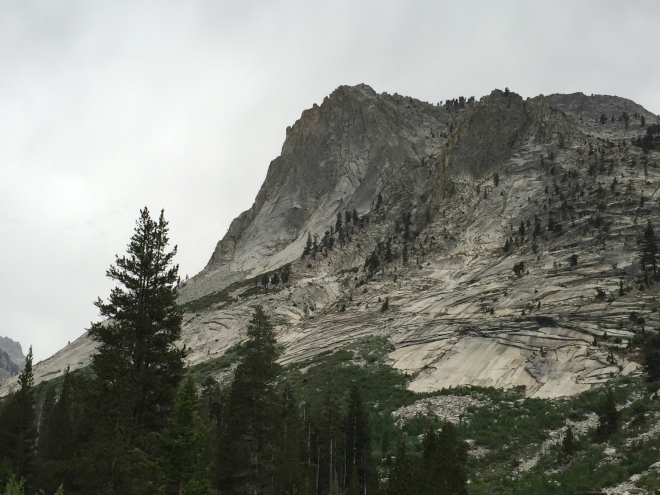 The canyon walls rose above us and started closing in.

Deadman Canyon got its name from this gravesite. A Basque shepherd, Alfred Moniere, died here in 1887. I stopped and sang “The Lone Pilgrim” for his memory. 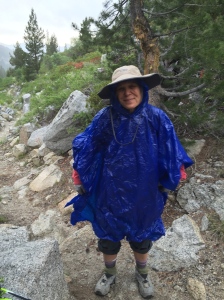 Dressed for the weather 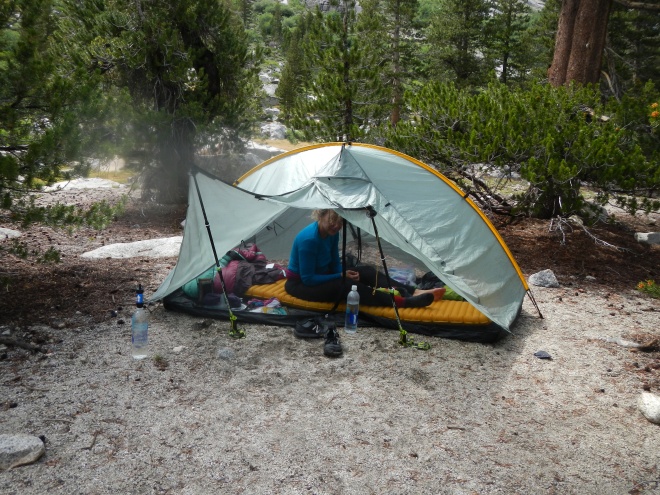 Our first campsite of the day, Upper Ranger Meadow.

The rain stopped, the sky cleared, and by 3:00 PM the sun was out. We dried everything on the big granite boulders, and decided we should hike farther up toward the pass. We probably hiked about 9 miles today. The day became indescribably gorgeous, and the campsite we found near the wall of the canyon is spectacular. It’s in the last stand of Lodgepole before the pass. The stream is running over smooth granite slabs, and down a steep spillway (not quite a waterfall). I’d hate to slip at the top of this drop!

We forded the stream barefoot today. The water was cold, but not icy (no snow left to melt), and the gravel felt good on my bare feet. Mosquitos are still a problem, but not bad up here, comparatively. 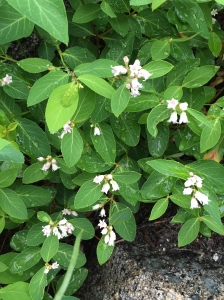 What are these, Heather?

This morning, I heard a deep thumping sound on the trail. It took me a few seconds to zero in on it and figure out where it was coming from. A gorgeous golden honey-colored “black” bear was digging at a rotten log. It didn’t notice me, and I motioned for Barbara to hurry up. She got to see it, too. I took out my camera and tried to move to a vista that was less obscured by trees, but it saw me and went galloping off upstream, huge hindquarters swiftly disappearing into the forest. That was the last we saw of it. I had been imagining a bear digging for grubs in a rotten log yesterday. And there it was, just as I had seen it in my mind’s eye! Wish I had taken a photo even though the trees were in the way… 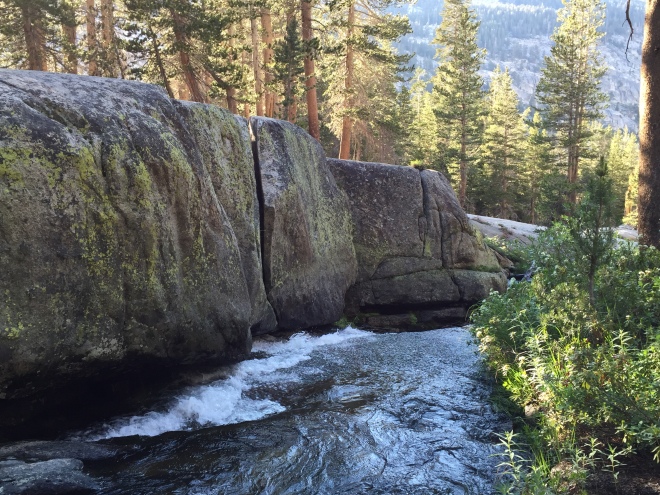 Near our second campsite of the day, at the last stand of lodge poles before Elizabeth Pass.

Today was like two days, with two complete camps, two tent-pitchings. I had never done that before. At the first camp, as soon as we got our tents up and got inside, the sky let loose. I love a good tent!

The stream opened up and flowed down slick granite. 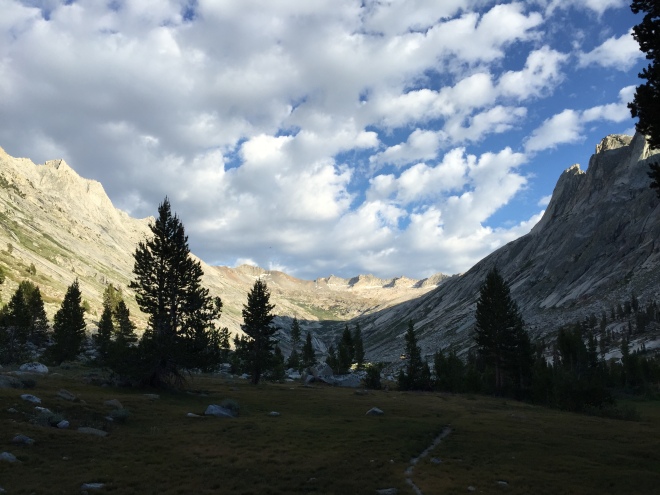 The view towards the pass from our campsite. 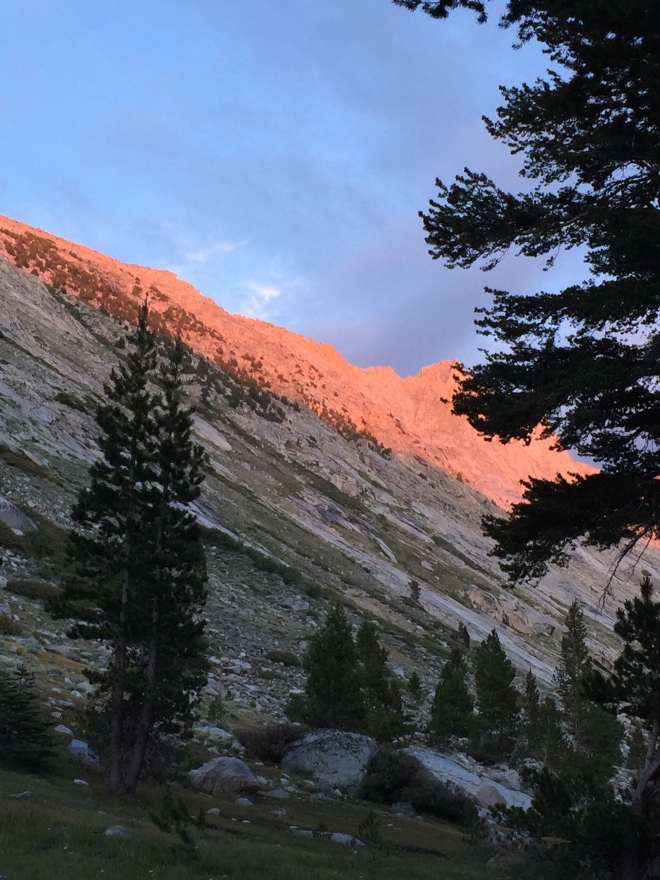 Alpenglow, as photographed from my tent. 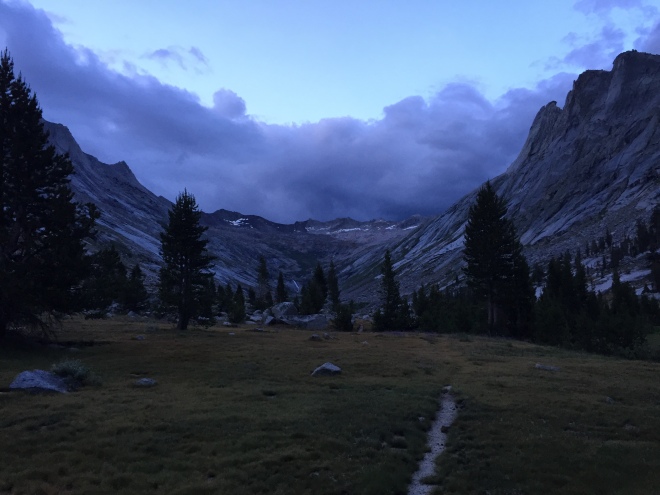 And the storm clouds began to gather on the peaks.

I have been listening to far-off thunder and thinking it was jets, cursing the pilots for interrupting my wilderness experience. But a huge lightning storm is bursting upon us, moving fast in our direction. From my tent, I can see the lightning on the peaks around us. Four miles away, then 3, and now it’s raining really hard. My heart is pounding and I’m definitely scared! I called to Barbara, and she seemed quite calm. But she can’t see the lightning hitting the peaks. It’s a beautiful sight, no doubt, but the tough of it striking one of the trees near us, or us, is really scary. I realized I left clothes out to dry. Oh, well…Every time the lightning flashes and the thunder rolls, I jump. Now the flash and crash are almost but not quite simultaneous. It really was amazing, watching it come closer and closer. Now it’s moving past and I feel a flood of relief. Hope the morning is clear so we can get over the pass. Today we were so hopeful.

It seems that all that is left now is heavy rain. And it’s only been about 15 minutes’-worth of storm I think. Whew! Disaster averted so far…