I didn’t take notes of my last day of my solo walkabout. So I haven’t gotten around to writing anything about that day. But it feels incomplete for me to leave my last entry in bed at Bearpaw High Sierra Camp. So I will recreate the last day for you, out of my ever-more-fuzzy memories. Here goes:

I awoke feeling refreshed from a comfy night’s sleep on an actual bed (though I did feel it was a bit too soft. I am like the Princess and the Pea when it comes to beds). I was all packed up and ready to hit the trail home when I came into the lodge for breakfast. I can’t remember what I had, but it wasn’t oatmeal. Of that, I am sure. Suitably caffeinated and ready for the 11-mile hike back out to my car, I started down the trail. After about a mile, I noticed that I was just grinning ear-to-ear, for no apparent reason. I was just, plainly and simply, happy. All alone, nobody to share it with, just damned happy!

This stretch of the High Sierra Trail is pretty tame: gentle ups and downs, with about equal parts of both. I was hoping to see Tony and Asenath again, and the outside World was starting to weigh on me. A week of no internet means that I have close to 1,000 emails to sift through. Ugh. It almost negates the beneficial effects of being away. But not quite! So I started out at a quick clip down the trail, stopping only for a water refill at Mehrtens Creek and a side trip a little ways down the canyon to check out something bright orange that appeared to be discarded. Turns out it was someone’s pack, and he was just returning to it from farther down the creek when I reached it.

It was a lovely warm day, and the wildflowers were everywhere. I only stopped a few times to snap photos, drink water, and feast on the now-ripe thimbleberries. 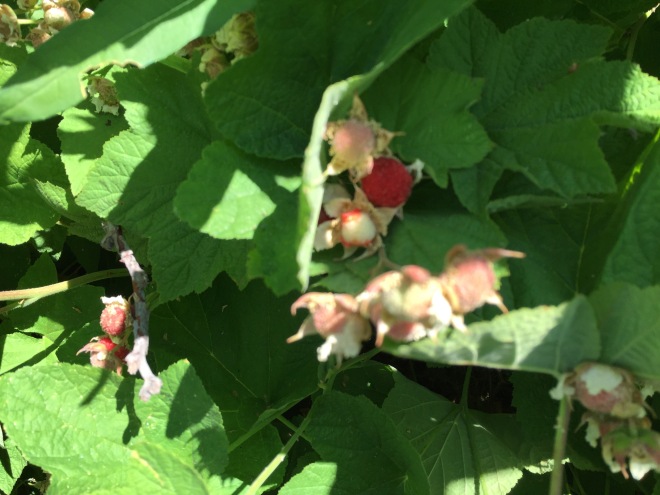 I passed other westbound hikers, and a few groups just heading out on the trail (lucky ones). One was an all-women group from Modesto who make a yearly trip to Bearpaw. I was dressed in my hiking skirt, favorite (and not quite as dirty as it had been yesterday) shirt, Dirty Girl gaiters—essential what I had worn almost every day—and they commented that I look like I had just stepped out of an REI catalog (never mind the fact that my trekking poles, shirt, and hat were the only parts of my ensemble that I purchased there). It gave me an extra spring in my step for a half-mile or so to think that I actually looked somewhat “stylish.”

As I descended gently into the lower elevations, it seemed to me there were even more dead standing pines than on the way out a week ago. I found out later that this was probably true: once the beetles infest a drought-and-pollution-weakened tree, they can pretty-much finish it off in 24 hours. The air was full of smoke, which I blamed on Central Valley pollution. I found out later that it was mostly smoke from the Grouse Fire, which had started up while I was out in the backcountry and was burning not too far away. That made me feel a little better about it, in retrospect. At least it was “natural” causes, not factory farms and vehicle emissions.

About eight miles into my hike, I caught up with Asenath and Tony, and a couple from Danville we had met at Bearpaw. It felt good to have an enforced slow-down, taking up the rear of the group as we walked back toward the Sequoias and our waiting cars. Asenath told me about her family. She was one of 22 (I think that’s the correct number) siblings, born to her father’s three wives. Although there is not a tradition in Kenya of educating girls, her father had a policy of helping whoever of his children wanted to go to school, provided they got good grades. Asenath said this was very unusual in her community. And lucky for her.

We stopped for photos at the first Sequoias we encountered, where I had taken photos on the way out. 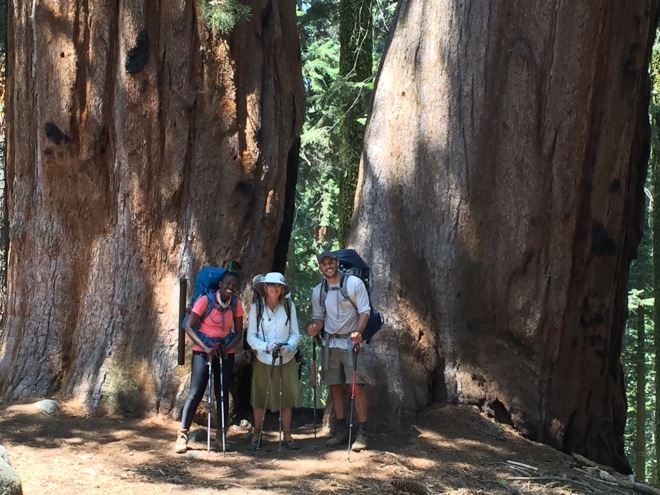 It was a great feeling, having been out in the high country solo—though, of course, it wasn’t all that remote, or all that “solo,” for that matter. Still, I had plenty of solitude to feed my soul.

Asenath posed next to the mileage sign. She and Tony had hiked 42 miles, to Kaweah Gap and back. I had gone a bit farther, with my side trips and foray into 9 Lakes Basin. According to my phone, I had hiked 58.93 miles in 6 days. Not bad. How I would have loved a swim in Hamilton Lake again before I got into my car! I said my goodbyes, got in my car, and started driving. I stopped at a store for a little shopping, and there wasn’t anything I wanted. So I went to the first Kaweah River crossing and immersed myself in the water to rinse off the trail dust and refresh myself for the long drive home. Thus ended my High Sierra solo walkabout, and most likely the last backpacking trip of the season. I am already longing to be back up there.

California is in such dire straits with the drought and the strain of so many people. My poor beloved state, which used to be green and golden has mostly turned a distressed gray-brown. They (the weather pundits) say that rain is expected this weekend (I’m back in October now), and that it will be the most rain we will have seen in six months. That’s not saying much… Please use water wisely wherever you are. I am planning on installing a rain catchment system for my parched yard, and am already bummed that I won’t have it in place to catch this weekend’s water.

One thought on “Returning Home”