Wide awake at 5:00 AM, and up and puttering around camp. Took a walk up the granite slabs, enjoying birdsong and first light. Way smokier than yesterday! I can barely see the volcanic spires that were so clear yesterday. 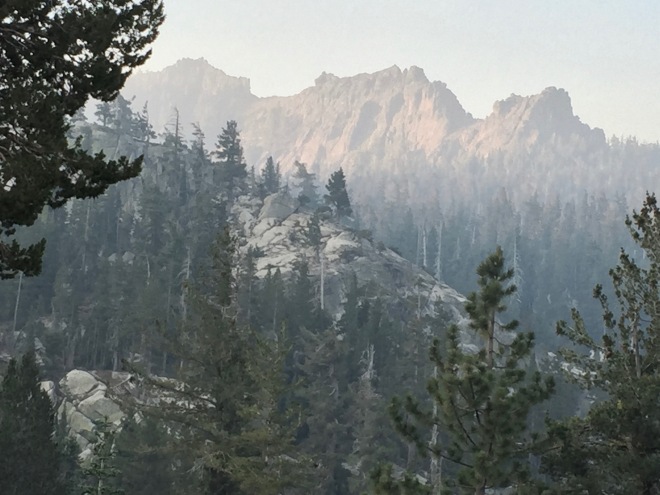 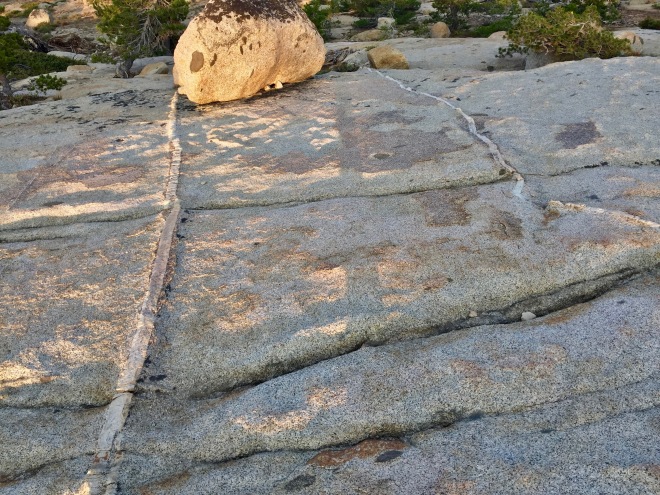 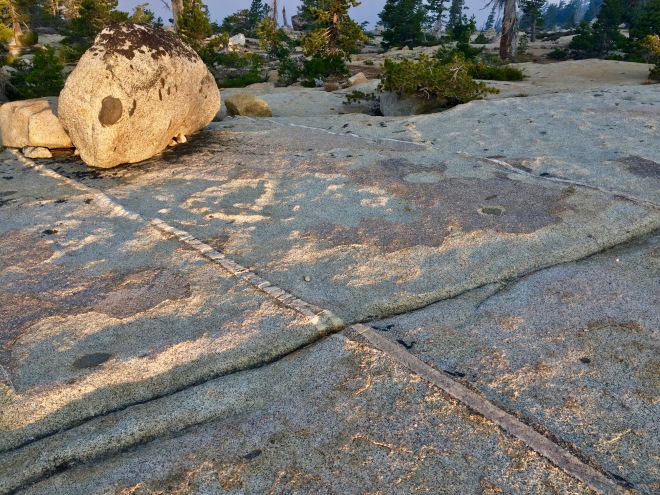 Early morning light on the granite was too gorgeous not to try to capture. 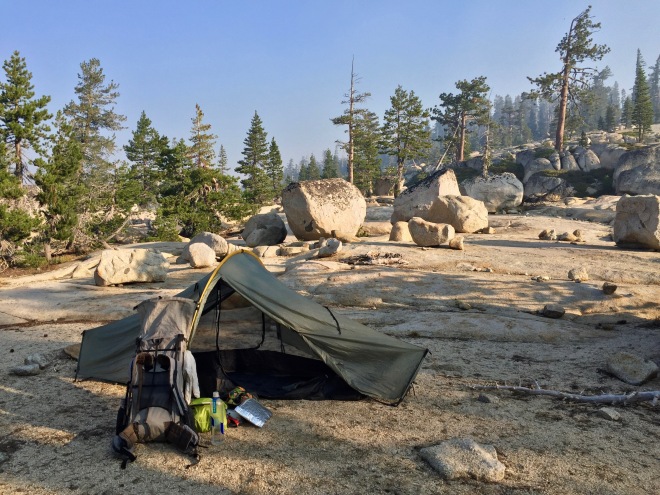 One last photo of my tent before ewe pack up. I love this little guy! A DW Moment Tarp Tent, made in Nevada City, CA. 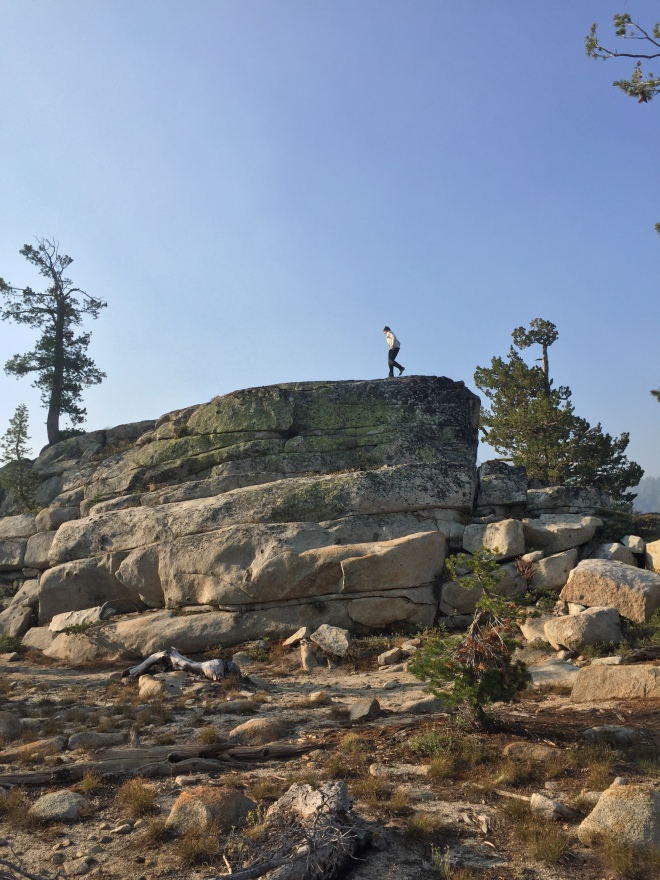 Barbara consented to take the obligatory annual photo of me, naked, in tree pose, on this outcropping. And no, I will not post the results here (or anywhere).

Barbara slept in, until 7:00 or so, and we finally got going sometime around 8:30, after our lovely breakfast of oatmeal and dried blueberries and bananas and a cup of coffee, adjusting our packs, and stopping at the lake to refill our water bottles. 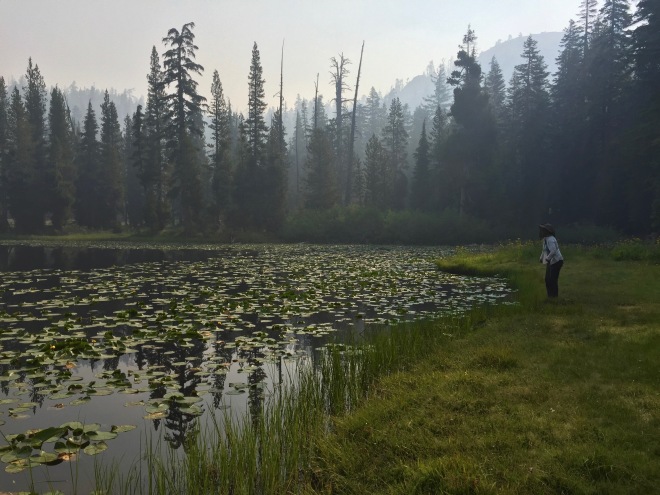 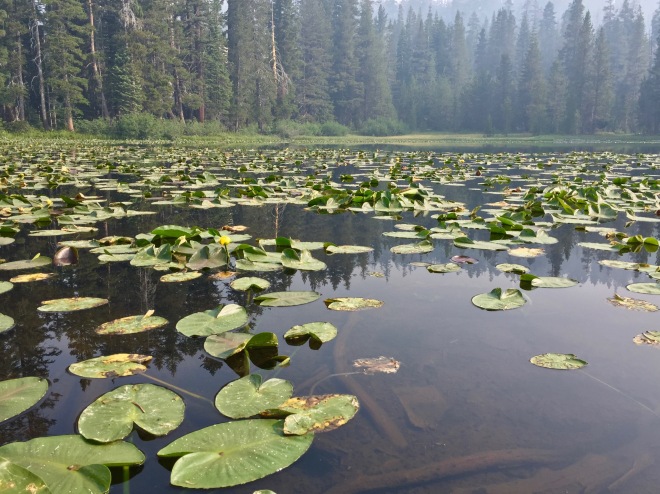 From the east side of the lake, I thought it would be easy to just walk back through the trees and intersect the trail up to our north, but of course we missed it, and spend about a half hour poking around in the wrong direction looking for something that was slightly more than a deer path. We retraced our steps and found it. Such a big relief, every time that happens! It was marked with a cairn every once in a while, which really helped. I made a mental note of how sure I had been that we were going in the right direction, when actually we were 90 degrees off from it. Belief in infallibility is a real weakness. The first part of the trail is a pretty steep climb, and then we hit the meadows where we once again lost our way amid the flowers and dense growths of skunk cabbage. Lots of wandering in Beauty. One time, looking down, we found a beautiful fresh bear paw print in the mud of a little stream. Never did see who it belonged to. 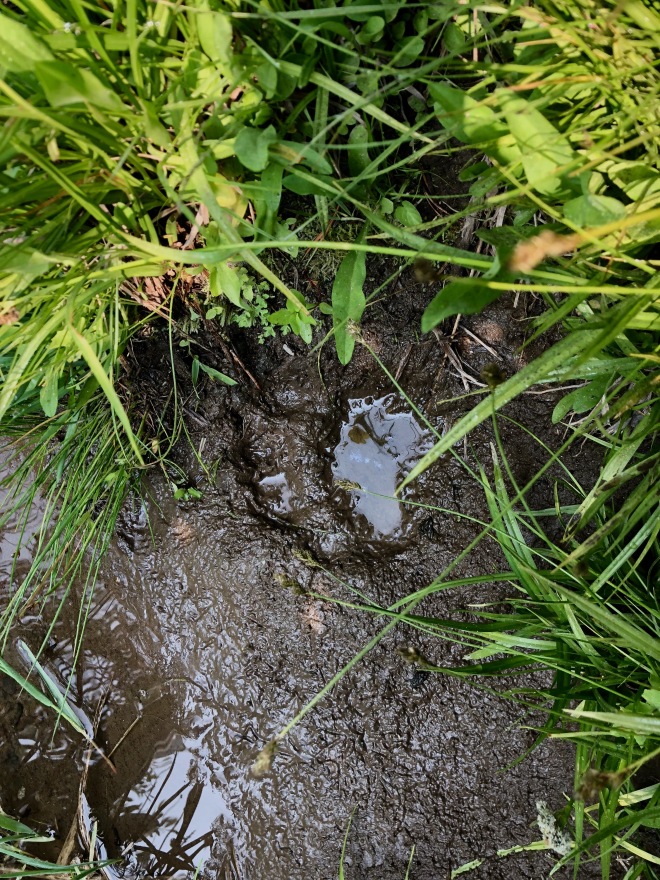 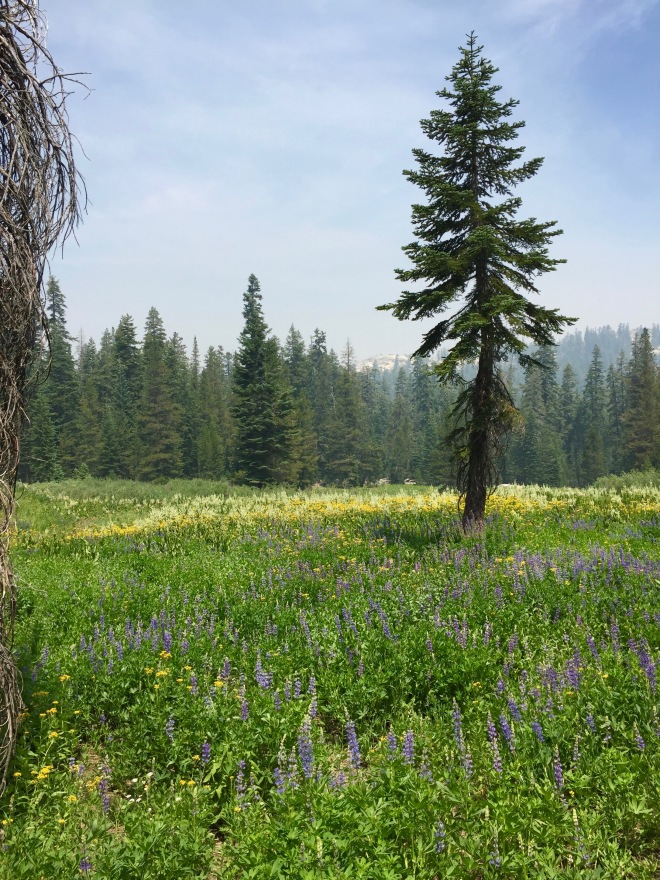 Trails were hard to find in the meadows, and we hated to step on the flowers. 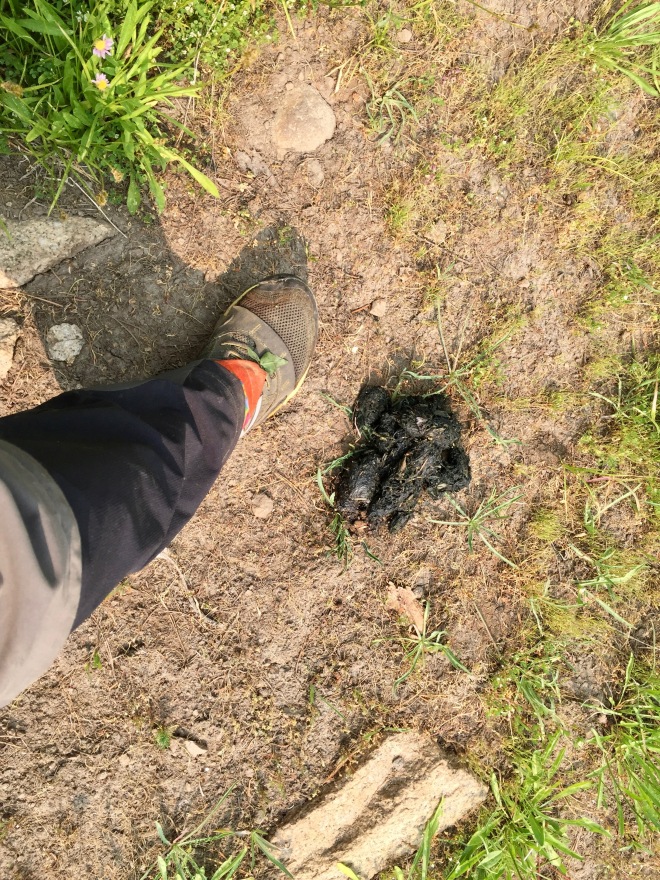 We finally located the trail up around the right shoulder of the volcanic cliffs, and found our way to the Underwood Valley. The glacial valley stretched down below us, a bowlful of smoke. We rested under a juniper and thought about what to do next. We had been intending to spend the day in that valley, which has a year-round stream, and just enjoy the water running over the smooth granite slabs, but it looked decidedly unhealthy to try and breathe that air. I thought that if we hiked back out to the van, we could escape the smoke by heading east over Ebbetts Pass, and possibly explore the Carson-Iceberg Wilderness or one of the other closer places on the map. So we decided to escape the smoke, which seemed to be getting thicker as the day progressed. I am disappointed that we didn’t take any photos of the “view” into Underwood Valley! I guess my inner journalist was turned off. 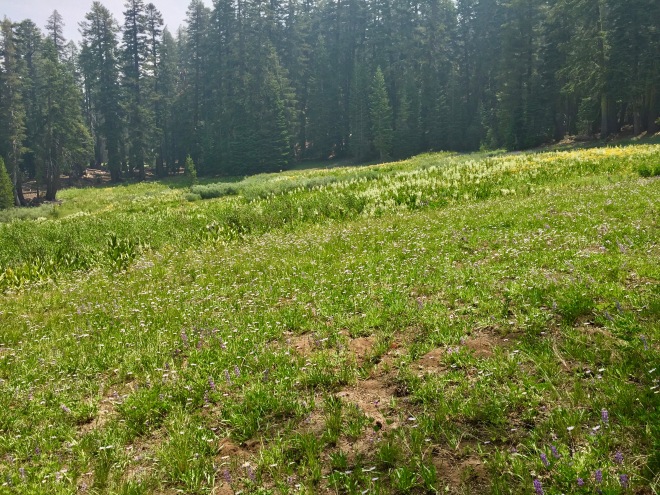 And so we once again headed back to the bear paw meadow, to find the trail back up to the saddle we had crossed over the day before, and from there back over to Wheeler Lake. Retracing our steps was, of course, easier, and we stayed on the trail more often than not. I found that I have a pretty good eye for remembering the contours of the land and individual trees. 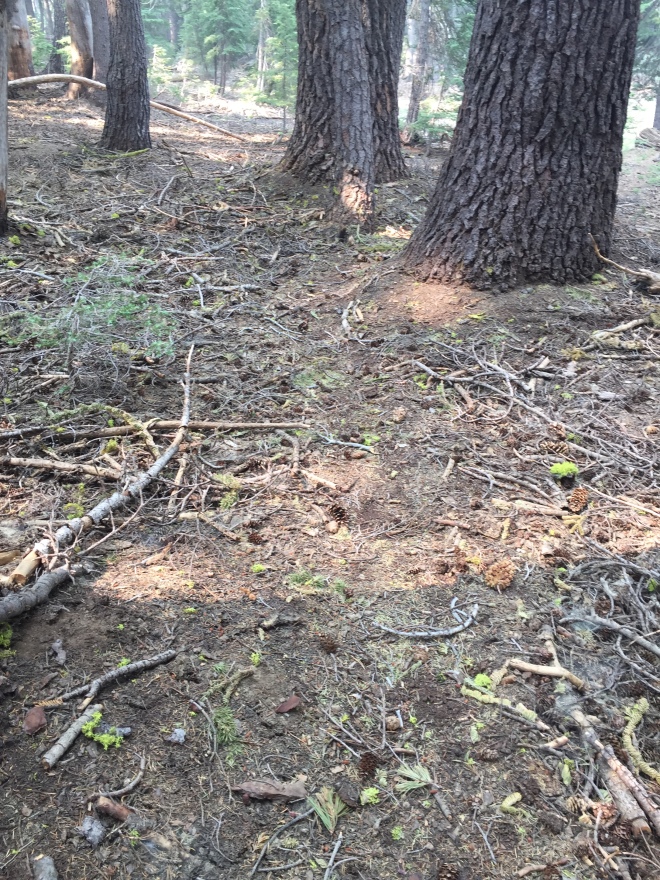 This portion of the trail was actually much more obvious than much of it. 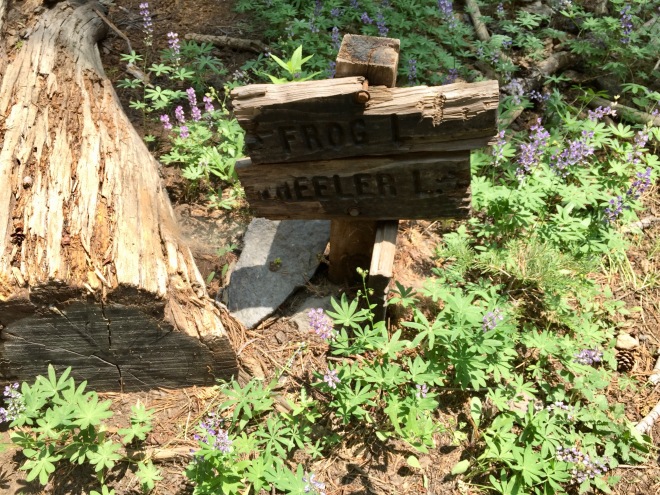 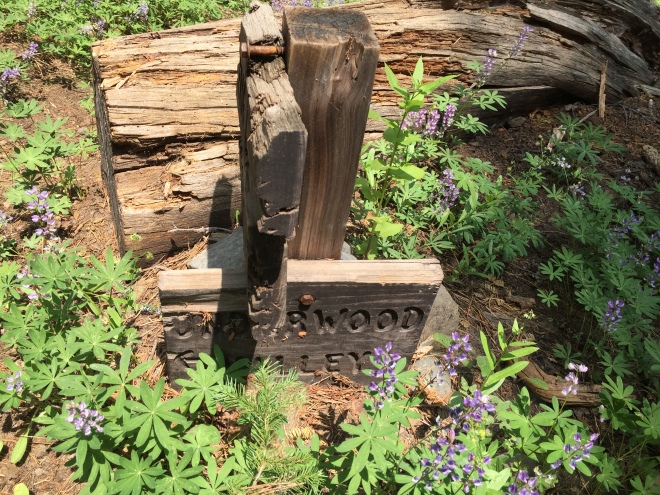 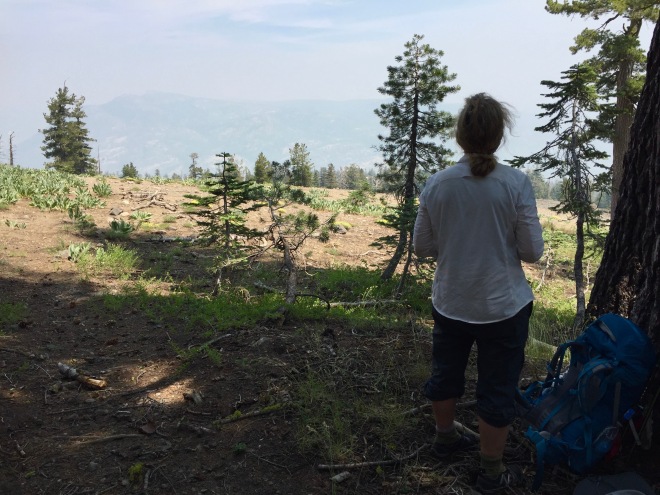 We stopped to enjoy the view up at 8500 feet. Very different from the previous day.

Now, at 4:00, we are at Wheeler Lake again, back at the little cold stream that feeds it. Here we stopped again to refresh ourselves in the water, rinse off the dust and sweat, and boil water for a hot meal. The stream noise blocks out any cowbells. We considered spending the night there, but decided to just push on and get out of the thickening smoke. This ended up being the right decision, as every mile we went closer to the start, the sky cleared a bit more. 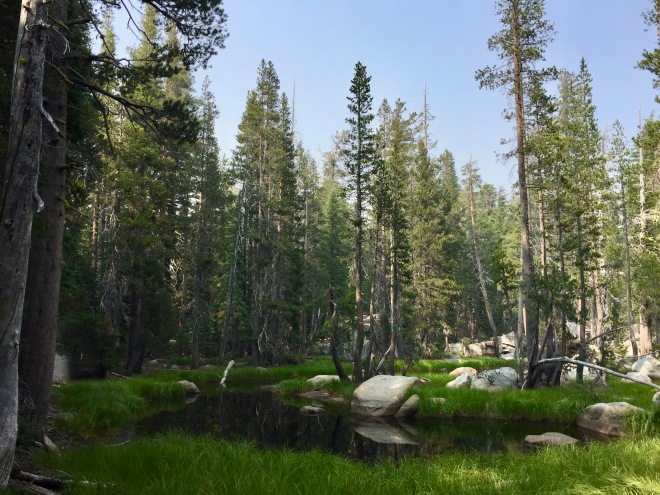 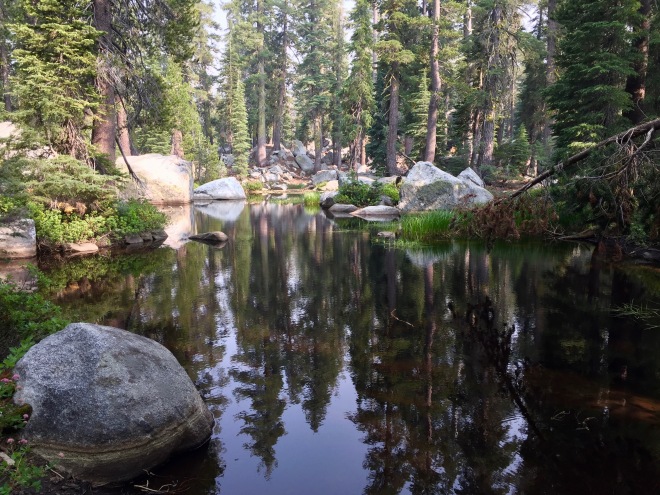 So quiet and peaceful in the forest, except for the damn biting flies.

The trail from Wheeler Lake seemed longer and hotter and quite a bit buggier in the forest than it had been coming in a couple of days ago. The deer flies feasted on my legs, but they are so slow that I sent quite a few to their graves—and felt good about it. I really don’t like to hike with long pants on, and I paid the price for my stubbornness, with a good share of red welts and itching. 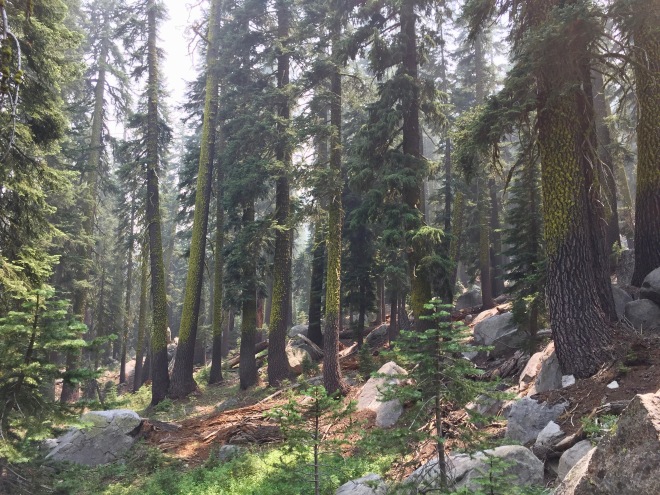 These red firs were huge, but they look spindly in this photo. You’l have to take my word for it. 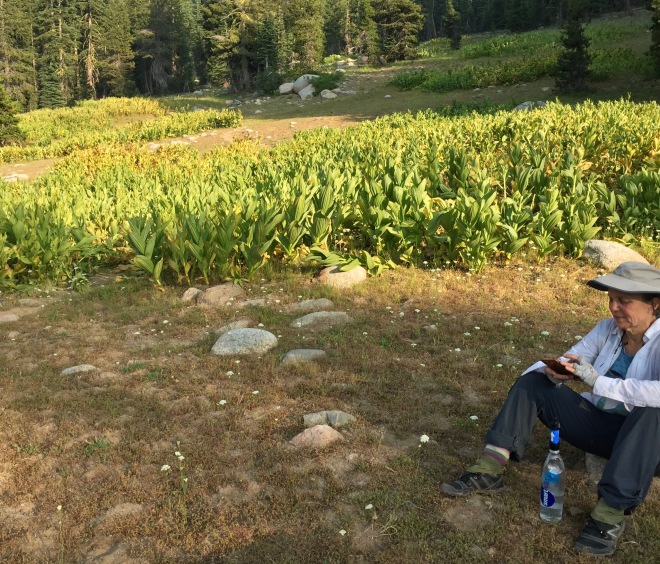 About a mile out from Highway 4, Barbara checked her phone and answered texts while I treated a blister on one of my toes. First blister I have gotten in many a year.

We finally got back to the van at around 6:30 or 7:00, exhausted, hot and bug-bitten, and I had a nagging cough from the smoky air. But the sky was much clearer, and it looked like we had made the right decision. Looking at the map, the closest campsite was at a place called Mosquito Lakes. Something about that didn’t appeal to us (though it looked beautiful as we drove past). Barbara suggested that we drive over Ebbetts Pass to see what there was to see, and we checked out the campsites in Pacific Valley. We were both so beat and a little beat-up from our 14-mile trek that day, and, spoiled by our three days of solitude, that we didn’t want to camp cheek-by-jowl with a bunch of strangers. Then we had the great idea (or rather Barbara did) to drive to Markleeville and get a motel room.  And oh, the anticipation of a shower! We were so hot, tired and dirty. 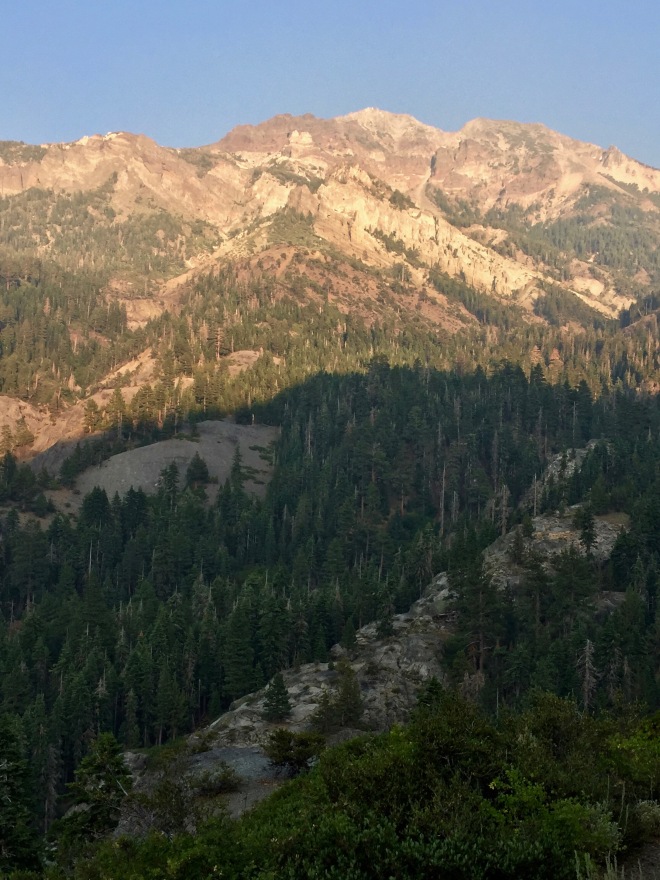 The view going over Ebbetts Pass was spectacular, and the skies were definitely clearer. The road is about 1.5 lanes wide, with no dividing line. Beautiful!

Arrived in Markleeville at about 8:00 PM, and it was completely closed up. There were people sitting in chairs along the road, and they were very helpful in telling us that there were no vacancies in town, and anyway Ron had just left in his red truck, and he was the only one who could have helped us. Luckily, as they were talking to Barbara, I spotted a young tattooed and barefoot man standing in front of an establishment with a sign that read “J. Marklee Provisions and Lodging.” I asked him if there were any rooms available, and he said, “I don’t know. I’ll look.” I followed him down the row of rooms while he opened each door, glanced inside, and closed it again. Hmmm. He turned and asked, “One bed or two?” I said two, and he said, “come back in a half hour and we will have one ready for you.” Great! Barbara asked, “What if the room isn’t any good?” and the young man responded, “Oh, they are terrible!” Turned out that the room was really comfy, with good beds, nice sheets, squeeky-clean bathroom, and a killer shower.

As we drove into town, I was pleased and surprised to see a sign for Grover Hot Springs, just 6 miles up the road from town. So Barbara and I decided to drive up and check it out while the room was being readied. I forgot to mention that earlier that day, when we were deciding where to go, I had suggested finding some hot springs and just relaxing in the healing waters. And here they were! Grover Hot Springs State Park was purchased by the State of California in 1959, to help struggling Alpine County attract some tourist dollars. It’s a beautiful place, with a lovely campground. We decided right then that we would spend the next day at the hot springs and stay at the campground. 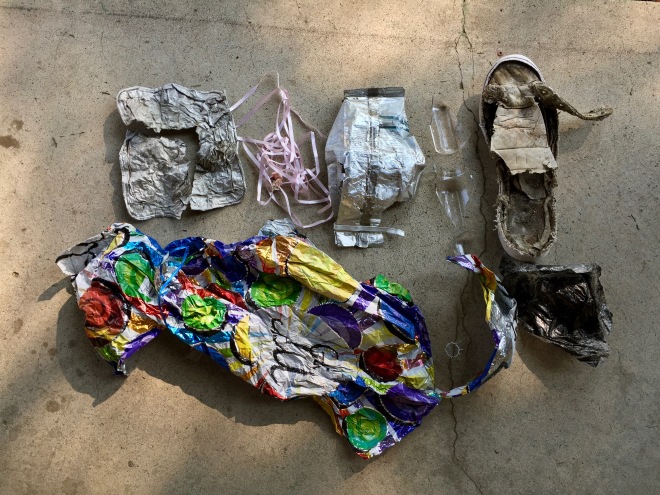 Here is the trash we collected along the trail: heavy foil, a mylar balloon, the remnants of a regular balloon with pink ribbon, a Starbuck’s bag, broken glass, and the remains of a shoe. 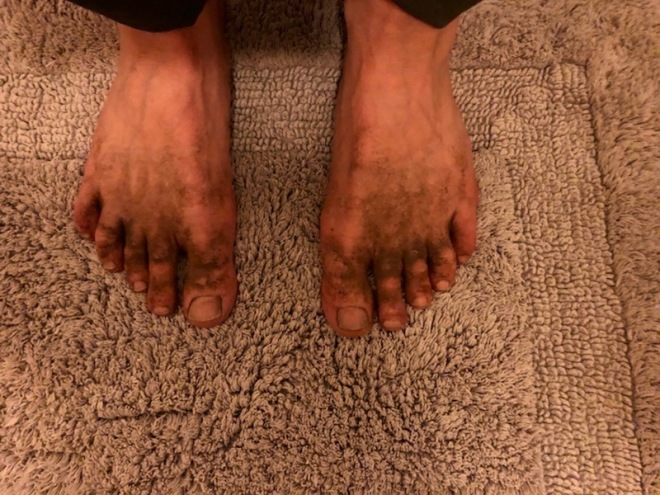 The trail was long and dusty. Barbara documented her feet before her shower.

Back at the motel, we started thinking how nice it would be to have a cold beer. But of course, the town was closed up. We pooled our few dollars, and decided to ask a couple of men we saw grilling dinner if we could perhaps buy a couple of beers from them. They appeared to be like likely suspects, but first, Barbara said she would ask the motel people. The woman making our beds told us that some other group had left a case of Fat Tire in the communal fridge, and we were welcome to as much as we wanted. Hallelujah! We sat out under a big cottonwood in the evening’s fading light drinking some of the most delicious beer I have ever encountered. Then showers. And checking email. Egad. The world is burning up in every way.

I slept well, though something bit my big toe and the itching kept me awake until I remembered to take a benadryl from our first aid kit. Then I passed out.

14 miles, 29 flights of stairs, according to my iPhone.

4 thoughts on “All Who Wander…”