The view from our campsite in the Stanislaus National Forest

Barbara Higbie and I left Berkeley yesterday afternoon, at about 2:00. We packed up the van and double-checked everything. All good! We caught the first wave of rush-hour traffic leaving town, and inched along toward Tracy. After that, the roads cleared, and as we hit Highway 120, I saw the billboard for Bass World, one mile up the road. Suddenly it came to me: I’d forgotten my trekking poles. Those are invaluable things on these outings, really helping with both uphills and downs for the knees and hips. So we pulled off the road, walked through the 100-degree heat and into the over-the-top Disneyesque shopping experience, past the fish tank with a couple of good-sized sturgeons swimming lazily around, under and alongside the waterfall and past the stuffed wolves, coyotes, mountain goats and elk, to the hiking department. $40 later, we were out of there and on down the road.

We stopped at La Michoacana in Groveland for a shared plate of enchiladas, rice and beans, eaten in their very pleasant outdoor area, and then headed up the highway to Cherry Lake Road. We were too late to get into the backpackers’ campsite at Hetch Hetchy, so we figured we’d just pull off the road in the Stanislaus National Forest somewhere. This was an area that burned in the Rim Fire of 2013, and there were still standing dead trees, but so much life coming back! The shrubs and bushes were full of wildflowers and insects and the air was full of birds. There were lots of young trees. I don’t know if they were planted or whether they are just coming back naturally. In either case, it was nice to see. We drove up a dirt road out of sight of the paved road, and set up camp.

Thunderstorms in the distance, and is that snow still on the mountains? Or the sunlight glinting off bare expanses of granite?

I confess to being pretty nervous when it comes to camping at places that one can drive to. It seems far more dangerous to me than camping where one has to make an effort to get there. But the air was sweet and full of the sound of a million or more crickets, the evening warm, and no signs of recent humans. There were cattle grazing not too far away, and I briefly imagined a stampede in the middle of the night crashing into my tent, before I fell asleep.

By about 7:30 this morning, we were packed up and back on the road. It had been a long time since I had taken this road, so I ended up taking a wrong turn and followed the road down to Cherry Lake and the dead end at the Kirkwood trailhead. Interesting! There’s a California Conservation Corps headquarters down there, and those guys in their trucks act like they own the roads. Kind-of scary to meet a convoy barreling down around a curve and taking up most of both sides of the road. Luckily, there was a turnout right there, and we took shelter and they thundered past. Then back up the canyon and on in to Camp Mather, the site of so many ecstatic years of the Strawberry Music Festival. We stopped at the Evergreen Lodge for coffee, a cookie and an orange, and then drove on to Yosemite. So exciting, driving into the park! 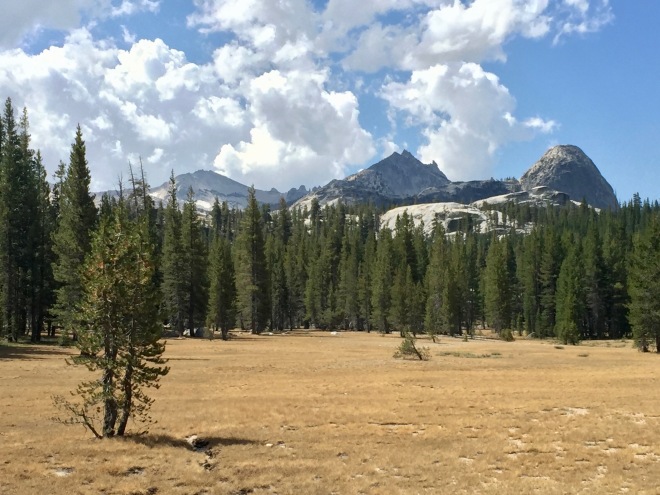 The Tuolumne meanders through its meadow. Johnson, Unicorn and Cathedral Peaks, and Medlicott Dome in the distance. 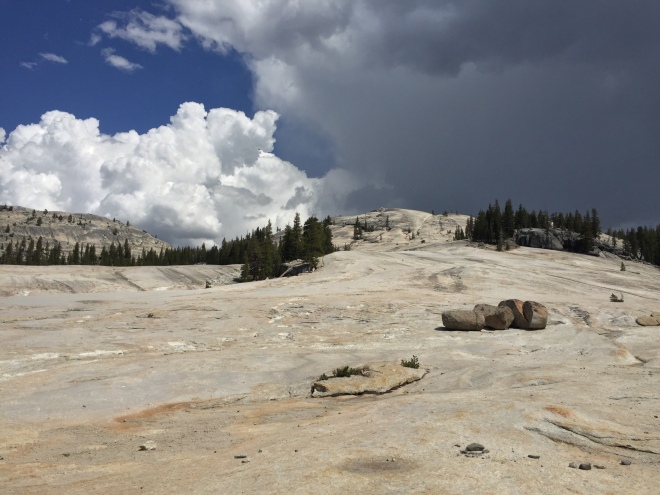 Ahhh! The scoured granite expanses! And rain in the future. 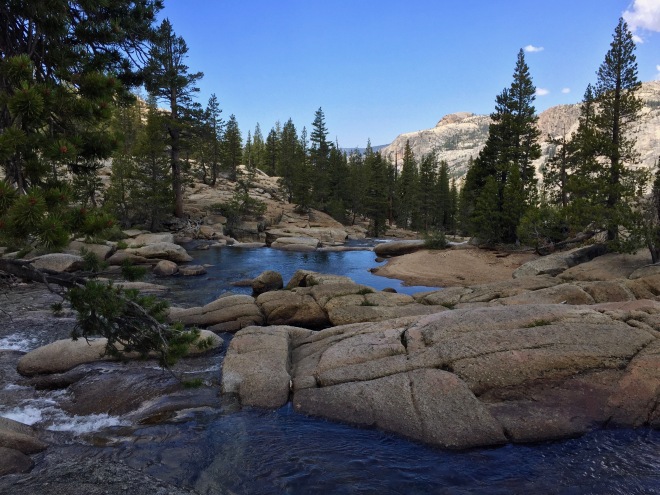 The Tuolumne drops into the top of its Grand Canyon. 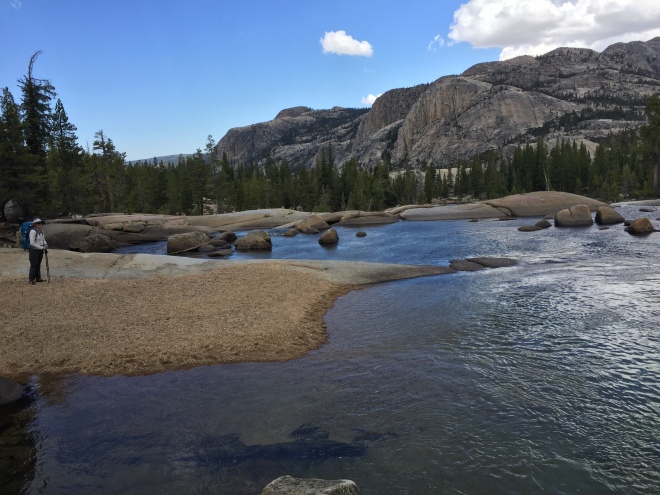 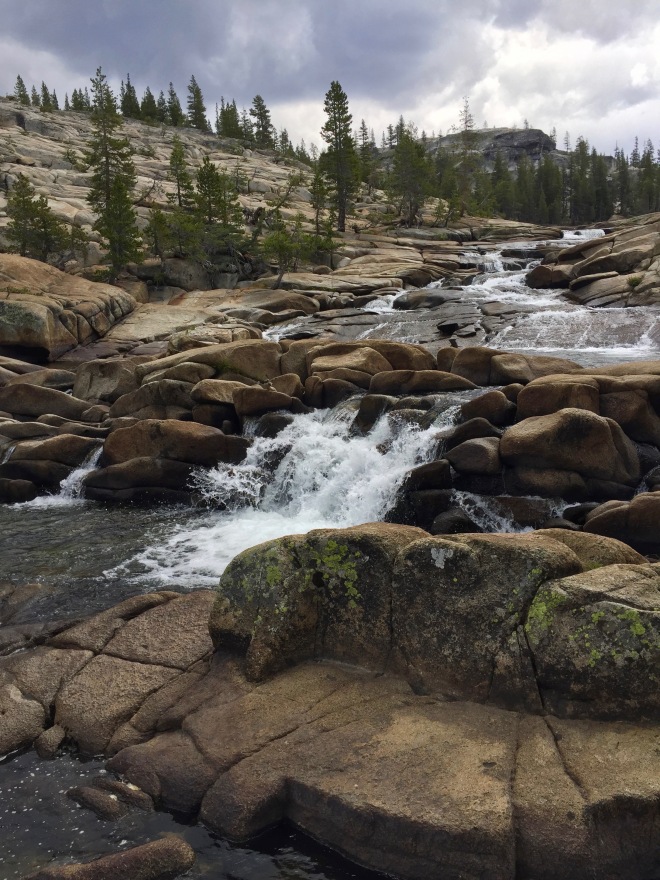 We got on the trail at 10:00 AM, and it was astoundingly beautiful, walking along the Tuolumne River as it winds through Tuolumne Meadows, then past Tuolumne Falls and White Cascade, where we stopped in Glen Aulin. That camp is closed this year, but the backpackers’ camp is open. We pondered whether to stop there for the night, but decided it was too early and there were too many people. We rested, had our hot meal at about 1:00, and loaded up with water, as a ranger had told us that there was none to be found between Glen Aulin and Virginia Canyon, some 7 miles distance. We  figure we’d make a dry camp somewhere in  between the two. Now it’s almost 6:00 PM and we have set up camp at the edge of a beautiful meadow in Cold Canyon, just below Elbow Hill. On the way here, it rained a bit (just enough for us to pull out our rain gear, walk for about 20 minutes, and then take it off again). The skies are clearing and it’s starting to get cold as I sit here. 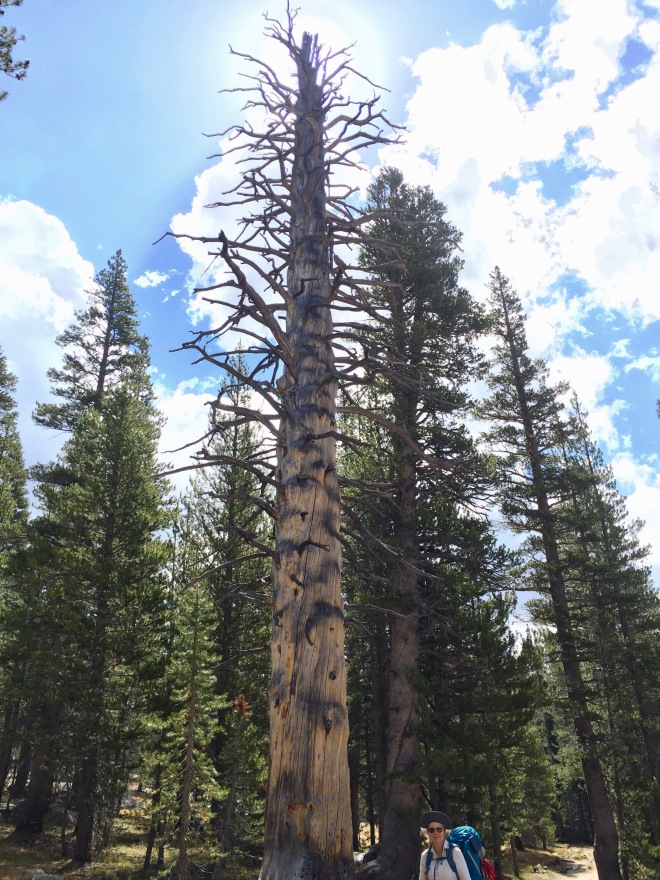 Beautiful new bridges over the Tuolumne. The old ones were washed out in Spring floods a few years ago.

Dressed for the weather.

There is nobody around here, and we are totally on our own. So far, this trip is more than I had hoped for, for scenery, aloneness and weather. And we just got word over the Garmin In-Reach that Biden picked Kamala Harris for his running mate. Exciting news! She is one smart, capable person. 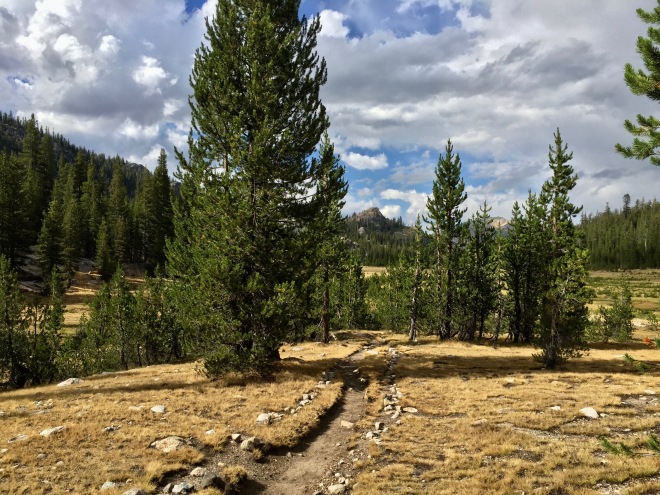 The trail suddenly opened up into a long meadow through Cold Canyon, as the weather cleared.

8:00 PM: No water anywhere. The meandering stream in the meadow is mostly bone-dry, with the occasional tiny stagnant puddle every mile or so. I fear that this may be the case for much of this trip, as the year has been particularly dry and last winter’s snowfall was pretty sparse. 150 years ago, John Muir said, “Every mountain is a fountain,” and I am afraid that may not be the case these days. I’m not used to not being able to wash up before bed. My feet are filthy, but I’ve managed to clean them pretty well with a face wipe. I can’t imagine putting them in my clean sleeping socks otherwise. 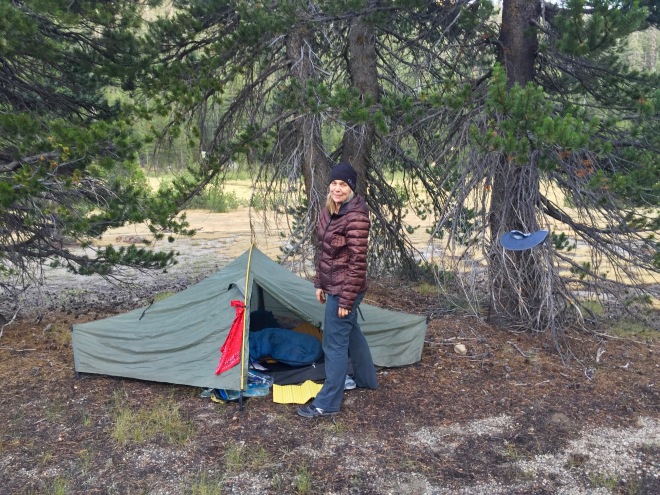 There was nobody on the trail from Glen Aulin to here. Three young men did pass us about an hour ago, headed the opposite direction. I have been reading chapters from Konrad Lorenz’s book, “King Solomon’s Ring,” out loud to B. His engaging stories about animal and human behavior, mixed with lots of interesting biological facts, is so enjoyable for both of us. Kudos to Marjorie Kerr Wilson for a beautiful job of translating it from the original German. Such a good read. I had last read it over 40 years ago, and figured it was time to revisit it. Plus, it is a very lightweight paperback, and every ounce counts. Also on this trip, I brought my old Kuhl hiking shirt, which I wore on the John Muir Trail in 2014 (and many subsequent hikes since). It is so worn-out, but I like it better than any other hiking shirt I have had, including ones from the same company. And of course, because it is so great, they don’t make them anymore…

The phone shows 10.8 miles today. Not bad for the first day!

2 thoughts on “Northern Yosemite and the Grand Canyon of the Tuolumne—8 days of up and down.”