After our last backpacking trip in Yosemite, I wanted to head right back up to the high country, for another backpacking trip. So I applied for a permit to go to Ten Lakes Basin, a relatively short hike up from Tioga Pass Road. I had an idea that Barbara and I could practice our off-trail skills and I could practice my compass-reading. Plus, this late in the season, swimming would be great in the lakes! We were stoked, and had our packs all ready to go two days in advance of leaving. But California was on fire, and the smoke blanketed the state. It was looking really bad, though the AQI still showed clear air in the Sierra. Yesterday morning, I called the ranger station in Tuolumne Meadows and talked to a ranger, who, after a lengthy discussion, said that he would not recommend coming up. He said hikers had started leaving the high country due to the smoke. We were crushed, so I spent some time on the computer looking for another place we could go, out of the smoke and where we could still get a permit, if needed. There was nowhere in the whole state.

Then I had a brilliant idea, to drive 9+ hours to Great Basin National Park! This little-visited gem is on the border of Nevada and Utah, on US Highway 50 (The Loneliest Highway). It didn’t take much to talk Barbara into it, when she realized it was either go there or nowhere. And a long drive for a road warrior musician is no big deal, unless there’s a sound check and a gig at the end of it. I LOVE this place. Long before it became a National Park, it always held a magic spell on me. There is a place on the highway where you can glimpse the cliffside of Wheeler Peak, which reminded me of Blueland, from The Dragons of Blueland, which I read when I was 7. I always imagined there was something special up there, and when, in the 1980’s, I drove by and saw it had become a new National Park, I immediately started exploring it. It IS magical! An island rising up in the middle of the big dry lake which is the Great Basin, crowned with 4,000-year-old bristlecone pines and year-round springs running down to the desert surrounding it.

Driving over the Sierra, the smoke was horrendous, and even worse in Reno. We left home at about 12:45 PM yesterday, and arrived here in the dark at about 10:30, found a campsite at the Baker Creek campground (3+ miles up a dusty washboard dirt road), set up our tents and went to sleep. A crazy powerful wind started up at some point, and woke us and kept us awake most of the remainder of the night. The ground was too hard to drive tent stakes, so we used rocks, which got dragged about by the wind and collapsed our tents. But we awoke in pretty good moods, and walked around the campgrounds looking for a more sheltered site. We decided to visit the Visitor Center and make a plan for the five days which stretched before us. 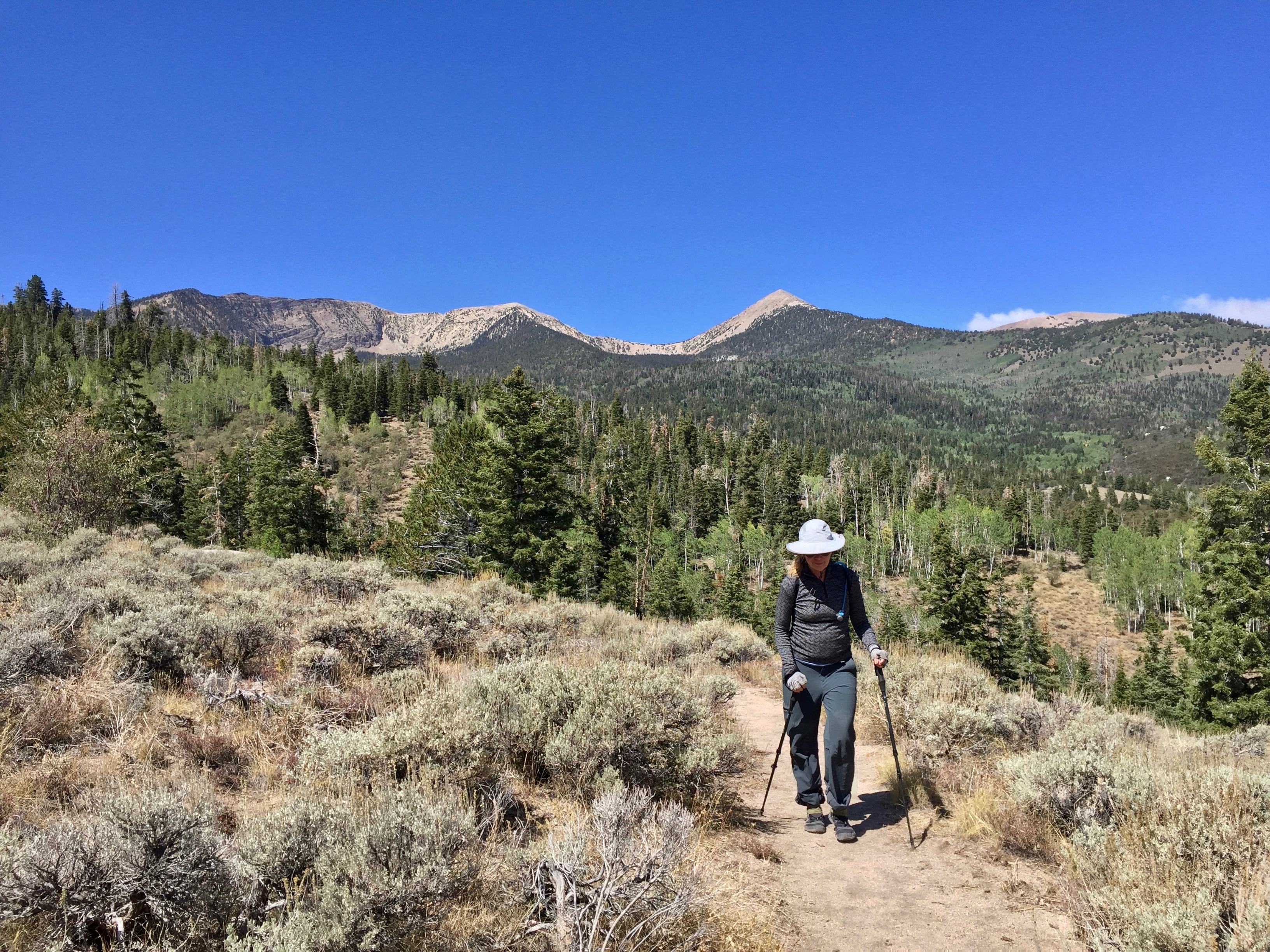 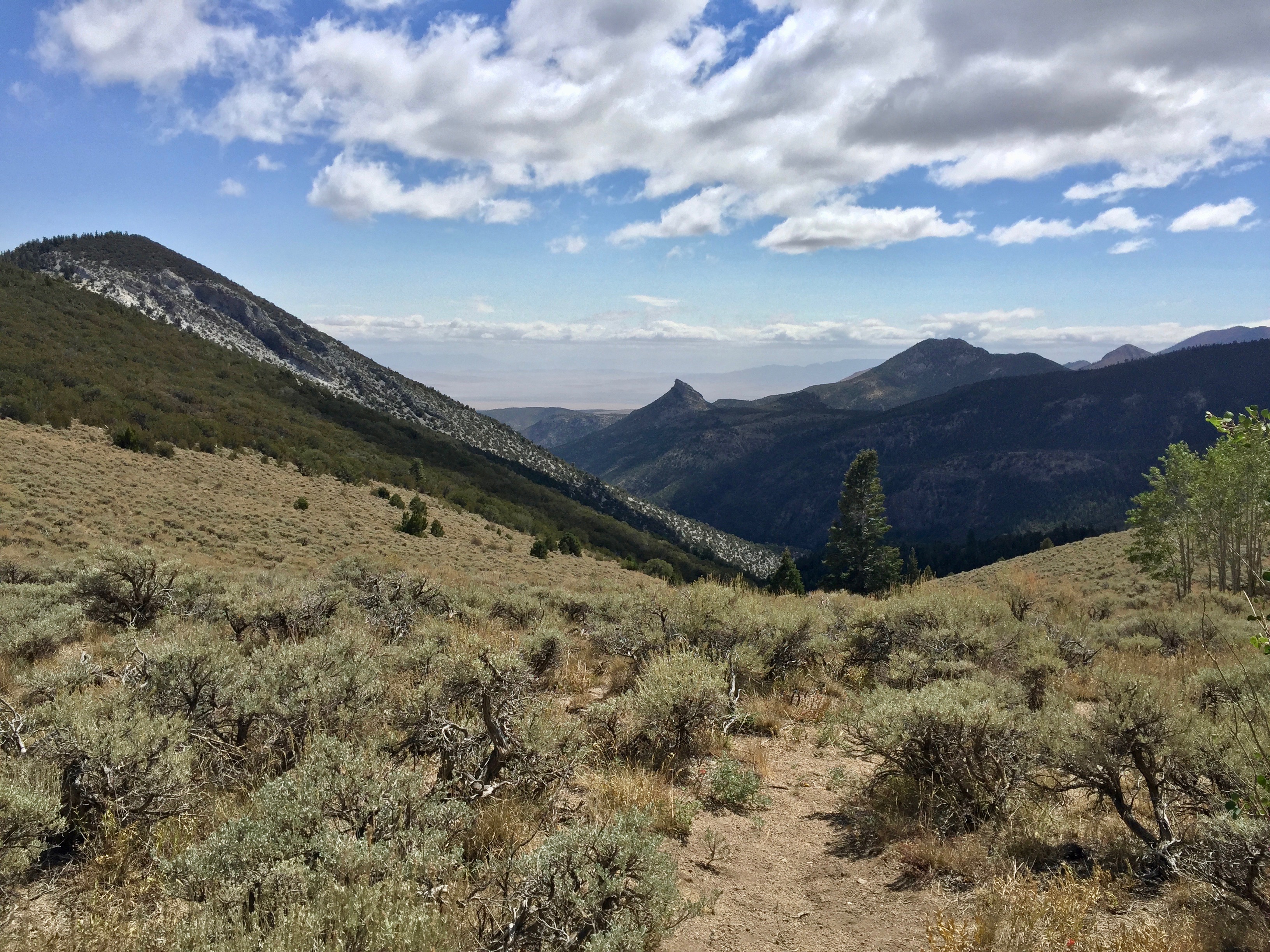 Okay. I admit, I am being stymied by the new WordPress program. I can’t figure out how to add captions to some of the photos. So here are the captions I would have attached, had I been able to, for the above photos:

We stopped at the little coffee trailer in Baker, on our way to the Visitor Center, and were really impressed by the quality of the espresso. After studying the maps, we decided to hike up the Shoshone Trail to the bristlecone forest on the ridge.It took about a 45-minute drive up a dirt road to get to the beautiful new trailhead (opened in 2017, I think). It was a steady climb up through aspen, spruce and pine to Mt. Washington and the first bristlecones. Then we wandered along the ridge toward Pyramid Peak, through a wonderland of healthy bristlecones and limber pines of all ages. 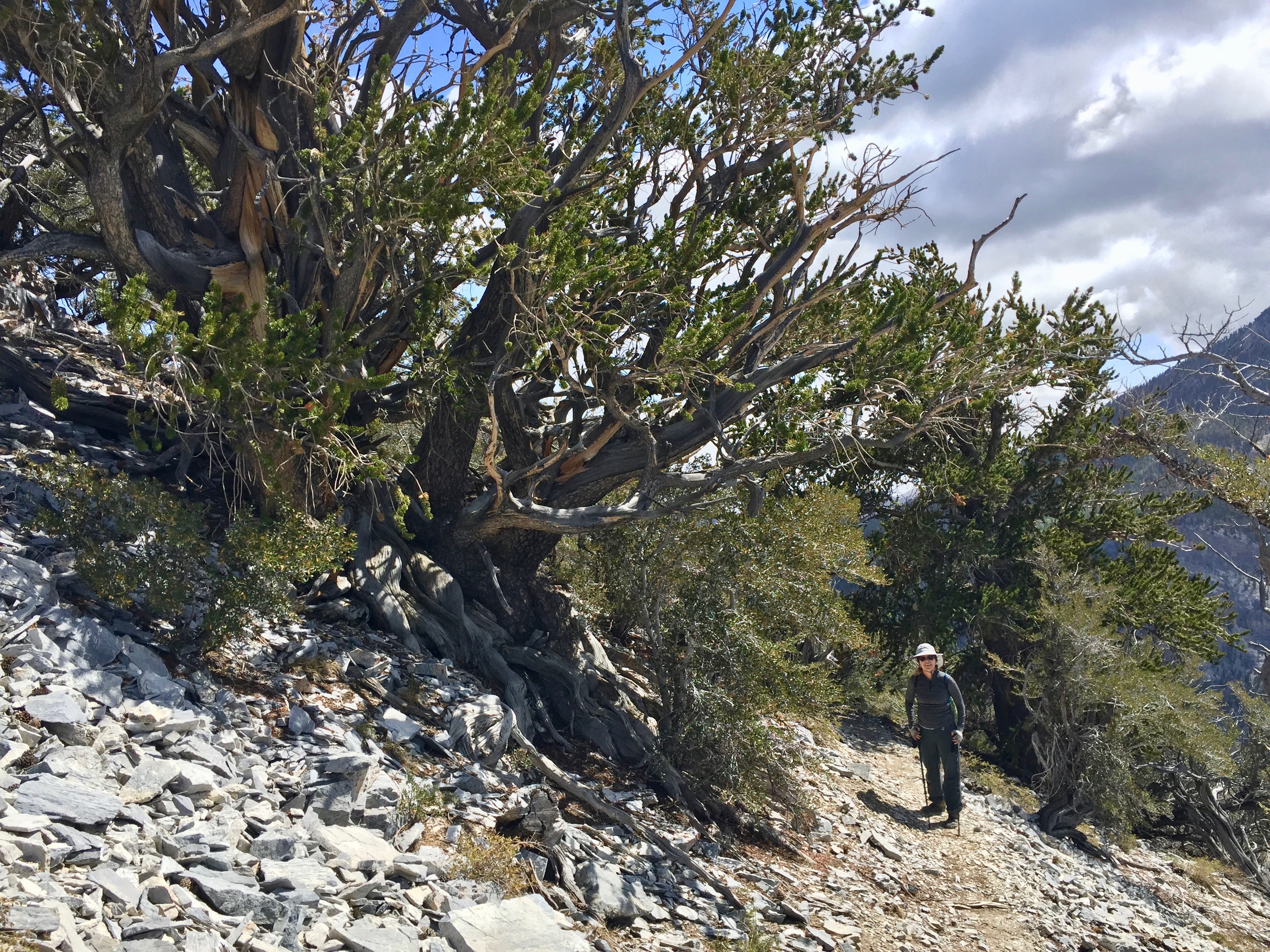 All the while, a storm seemed to be brewing up by Wheeler Peak, and deep grey skies were quickly approaching us.

We reached an elevation of 11,775′, and the trail was very difficult to follow. I thought it skirted a peak, so I took off over the scree—you could see that others had gone that way, but maybe they were mountain goats instead of humans. It was rough going and slow. After a while of wandering up and down the slope, I cut back up to the ridge and hollered to Barbara to join me. Suddenly, we were surrounded by more bristlecones, growing out of the gravelly granite. The more exposed to the elements the trees are, the longer they live, as the dry winds keep them from rotting, for thousands of years. That is something to ponder. I mean, what does a 4,000-year-old being think about, minute-to-minute? We must seem like so many ants to them. 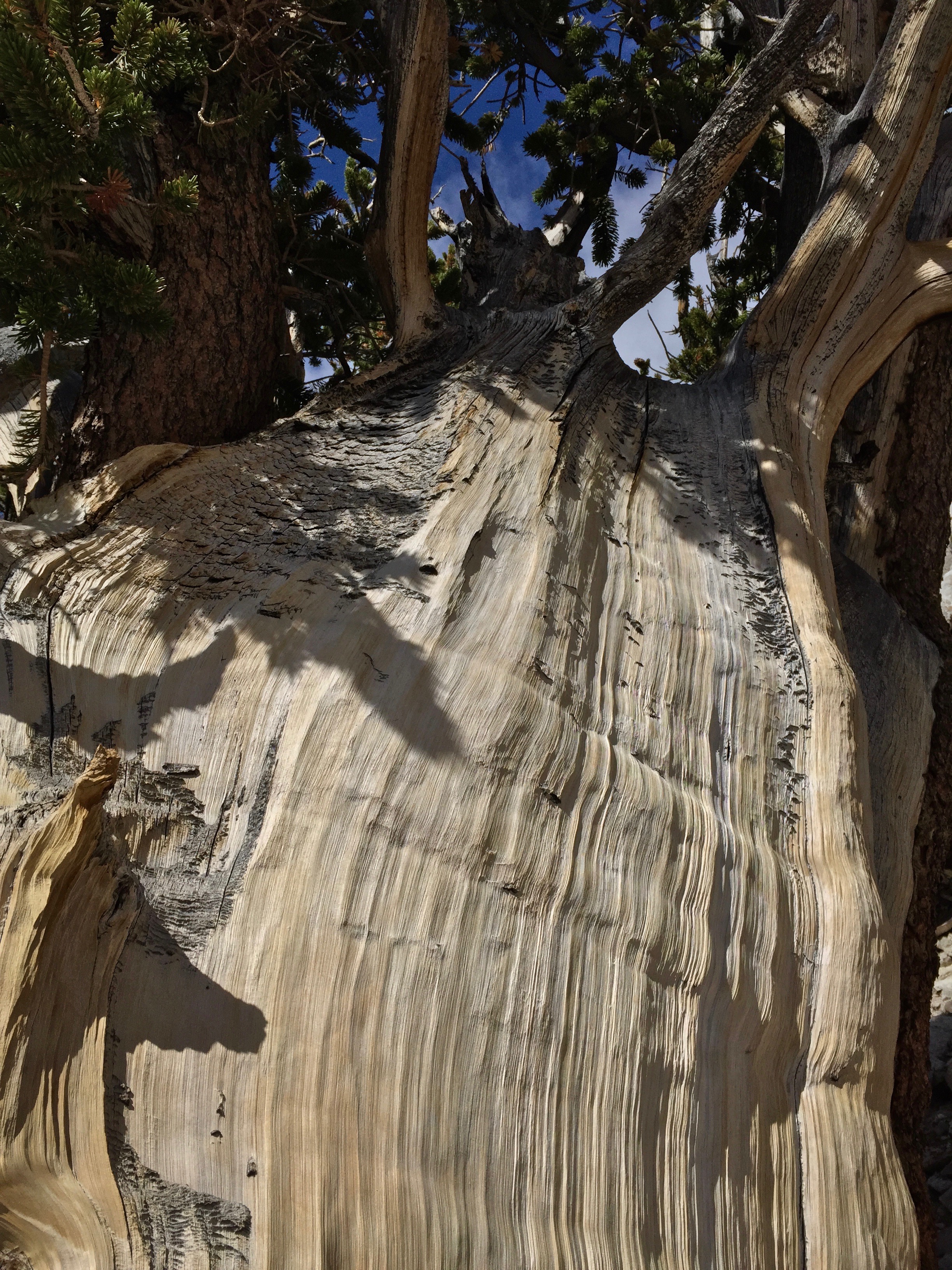 I found a sign, which said, “Bristlecone forest. Please stay on trail.” Immediately after the sign, we lost the trail completely in the hard rubble, but we figured it must just follow the ridgeline.

The wind at the top was incredibly powerful, and I confess I was worried that I would be blown off and over the edge, where we could see down 4,000′ or so to the basin floor. I walked crablike, using my trekking poles on the left side to push me away from the edge.

Finally, we saw a trail heading down a draw where we thought we needed to go. It was, by this time, 4:30, and I feared we might run out of sunlight before we got back to the van. We happily left the windy ridge, following the fainter and fainter trail until we lost it. Rather than return to the windy ridge, we decided to bushwhack down the drainage, which we could see fro the ridge would eventually get us in the vicinity of the van. So for the next two hours, we chased the light, going as fast as possible in the right direction, over and under fallen trees and crossing and recrossing the creek. B and I both began to tire, and and I got anxious (because I always feel that if there’s an accident it’ll be my fault for getting us in the situation), though the beauty never failed us. Occasionally, we would hit about 50 yards of an actual trail, probably left over from native Americans or early white settlers, or just a popular animal path through the tangled woods. It always brightened my spirits, but then it would disappear under a windfall or into the creek. When we finally hit the actual, groomed, modern trail, around 6:30, we were ecstatic and exhausted, but nearly danced down the final stretch to the van. Though we were never in danger of getting lost for long (we knew we had to follow the stream down and it would eventually lead us to the road, if not the trailhead), the terrain was really rough, and if anything had happened, it would have been very difficult to get help. I only stopped once for photos in the woods. 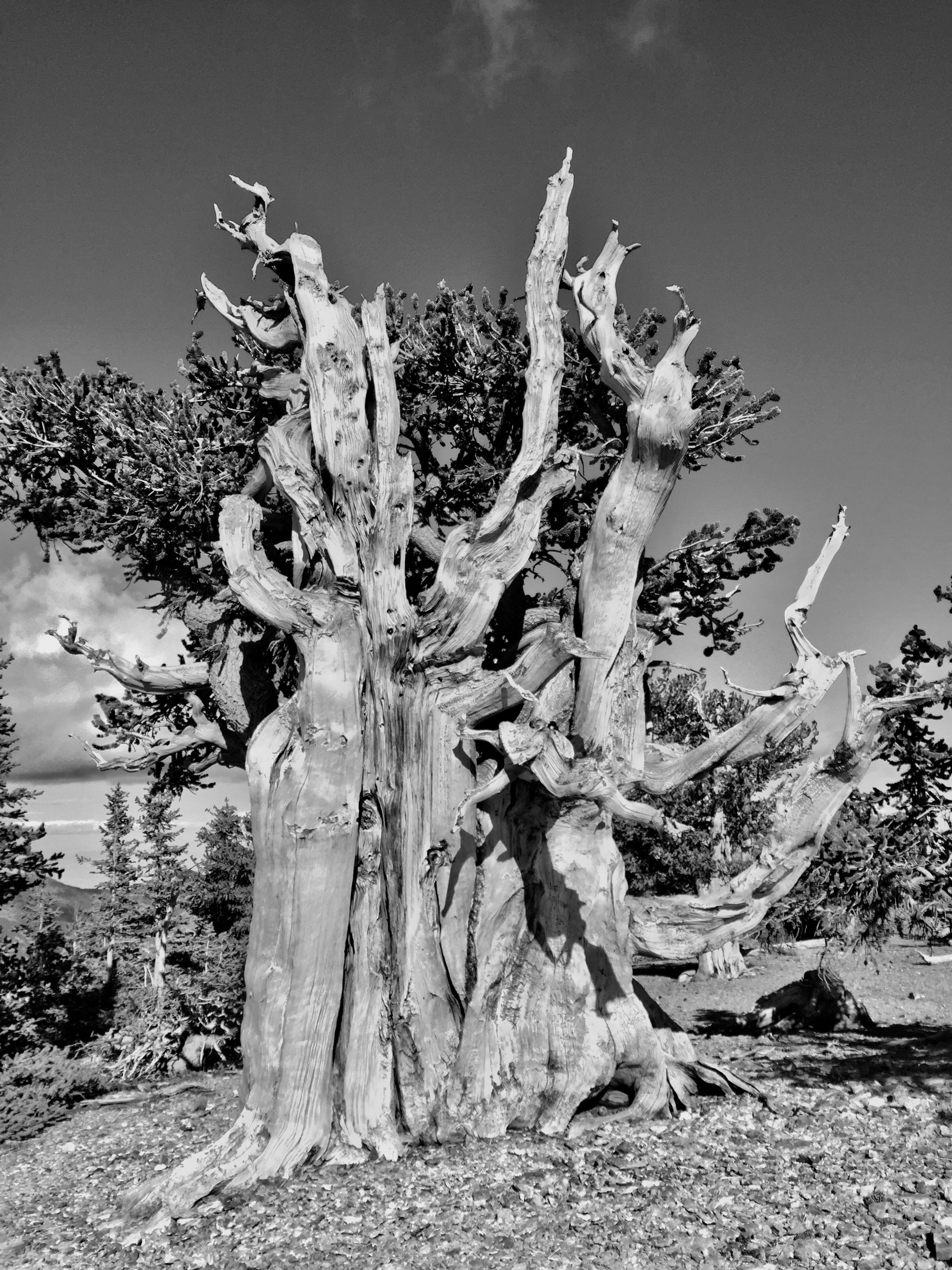 A couple more bristlecones for your viewing pleasure. Each one seemed to want its portrait taken.

Somewhere along the way, my left knee began to give me pain, and by the time we got to the van, it was stiff and didn’t want to bend. We got back to our new (out-of-the-wind) camp at about 8:00, and rehydrated our dinner while we set up our tents. I was looking forward to a good night’s sleep. Walking down to the tent site from the van, I suddenly got a shooting pain in my knee, and hobbled the rest of the way. Took two ibuprofen and bedded down. A cold, cold night, but happily the wind was still. And the most beautiful dark sky with way, way too many stars. The Milky Way flowing right overhead. Saturn and Jupiter shining bright. I wish I could take a picture of that!

5 thoughts on “Escape from the Fire”