It’s been a long day. Betty was very sick from altitude. Poor thing! But she soldiered on admirably. We climbed a lot, from Little Yosemite Valley at about 6100’ up to Sunrise Camp at about 9300’. It’s grueling work sometimes, but with amazing views. I saw Mt Clark and recognized it from a painting that hangs above the kitchen table at Lauren Miller’s home in Mt Shasta, where I had just stayed for a week for the Shasta Fiddle Camp. I felt like I had been there already. 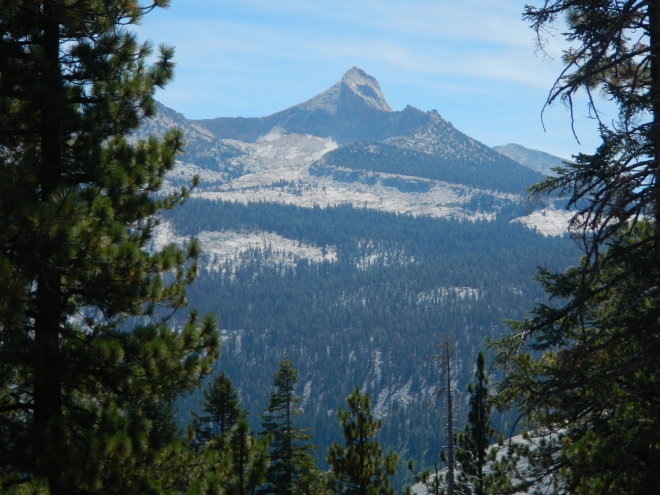 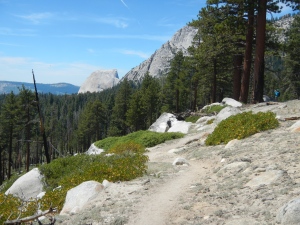 Late in the afternoon, I saw what may have been the start of a forest fire off in the next drainage, near Merced Lake maybe? Saw and heard Clark’s Nutcrackers, and rested beneath Mountain Hemlocks (Muir’s favorite tree), big Jeff Pines and Red Firs. I feel like we’re really up there now! 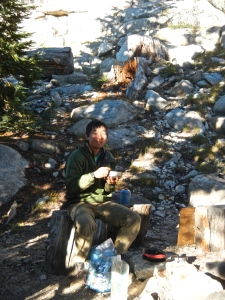 Shared our campsite at Sunrise backpacker camp (which was very crowded!) with a young Japanese man name Aki, from somewhere near Fukuoka. He had hiked from Bishop, 11 days on the trail, eating white rice every night. his pack weighed over 50 lbs. (his one-person tent weighed more than both Betty’s and mine put together).   Made me feel grateful for Betty’s careful planning, which kept our packs down to around a manageable 25 lbs. most of the time.

Met some hikers on the same schedule as us to get to Whitney. The woman, Annie, had a small backpacking guitar. I was so jealous! But then I hefted it, and decided I didn’t want to have to carry that much more weight. I took comfort in the thought that we would be meeting up with Annie more on the trail and I’d have a chance to play a bit. 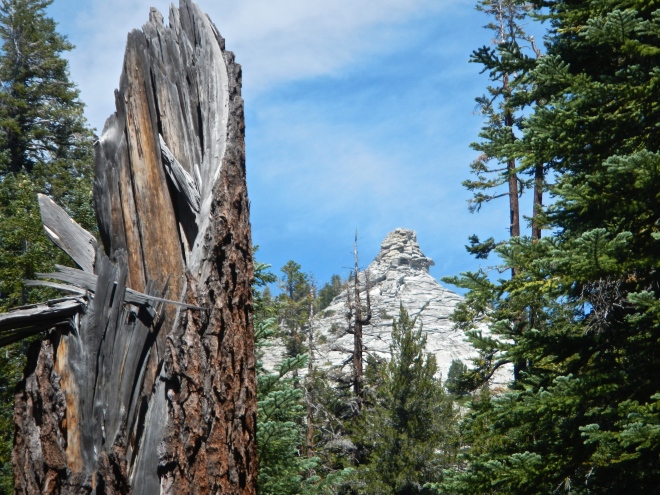 ADDENDUM: well, the painting above Lauren’s table in Mt. Shasta is NOT of Mt Clark, but of Royce Peak. I guess the sense of deja vu was caused by something else… maybe my own version of altitude sickness.

The forest fire I saw was most likely the start of the Meadow Fire that is now burning in Yosemite.

AND we never met up with Annie and the guitar again for the rest of the trip.