A river of wind has been running above our heads through the pines all night long, strong and steady. Every once in a while, a current breaks loose and slaps my tent around. The day looks perfectly clear and beautiful, but I am loathe to leave my warm bag and begin the chores of backpacking: the morning ablutions in cold water, the filtering of water for breakfast oatmeal and hot beverage, followed by the packing up of sleeping bag, pad, and finally tent, and the repacking of the pack. Invariably, I will be almost finished with packing, when I realize that I need some other item that is, of course, at the bottom of the pack already. Blergh.

On this trip my typical cup of morning tea has been replaced by a hot cup of cacao, which I was loving at home. It’s good on the trail, but at home I lace it with sri racha, which I don’t have with me, and that makes all the difference. Next trip, it’ll be back to tea. 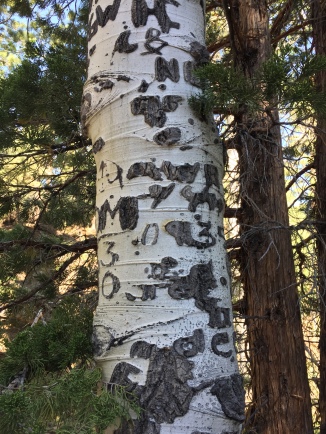 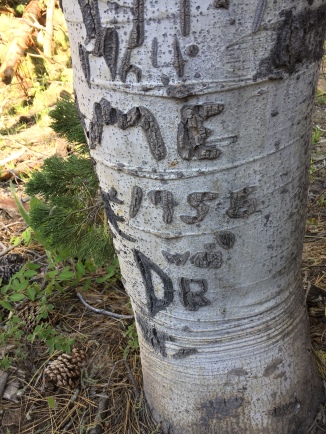 Our path wandered through an aspen grove, and an explanatory sign informed us that these trees were used as sort-of message boards by the mostly-Basque shepherds who used to spend the summers with their flocks of sheep in these mountains. John Muir spent his first summer in the Sierra as a shepherd, with a flock of over 2,000 sheep. He fell in love with the mountains, and became a vociferous opponent to the practice of herding, as he saw first-hand the damage it did to the land. There haven’t been sheep in these parts for a long time. 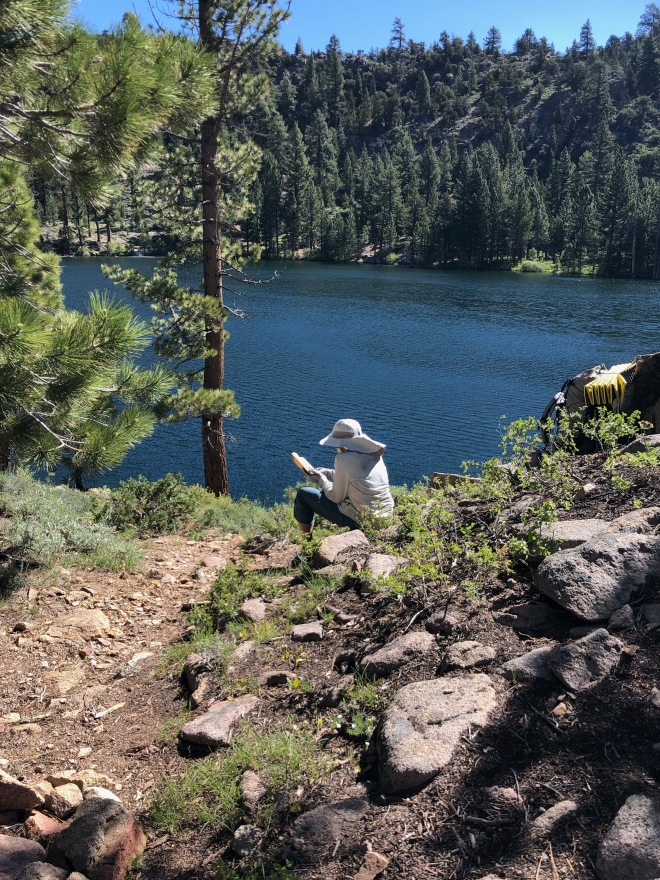 We are somewhere on a rocky outcropping above meadows and streams and mosquitos. It’s sunny, with a cool breeze. There were lots of little stream crossings today, visits to beautiful Roosevelt and Lane Lakes, and almost no people.

The edge of a little no-name lake along the trail. So green and lush…and probably a mosquito nursery.

Barbara and I stopped on the trail for a nice chat with two English sisters, Helen and Stephanie, who were a long ways from home, and backpacking together. They were able to give us the lowdown on some of the stream crossings. We did well, until the last one, when I slipped and got both feet (and socks and shoes) wet to the ankles. I hike in New Balance Minimus trail runners, though, so they dry rather quickly and there is no chafing to speak of.

The entirety of this hike runs along the east side of the Walker River. Many of the hikes in this area require fording the river, which is what I was trying to avoid when I planned the route. Here’s what it looks like, a good part of the way.

There are areas where I would consider a crossing, but it might require swimming. Best to avoid it altogether, though the west side looked so inviting!

In the afternoon, we left the main trail and hiked up Long Canyon, looking for a place to camp. But it was too steep, with nary a level place anywhere to pitch a single tent, let alone two. So we stopped and took our time preparing our hot meal, and had a lovely nap under a beautiful old juniper.

Once rested, we decided to head back down to the main trail again and push on to Piute Meadows. We came to a big stream crossing, with no chance of staying dry, and Barbara said she didn’t want to do it. It did look daunting, very swift though not particularly deep. Clearly, the trail continued beyond the crossing. So we decided to double back. 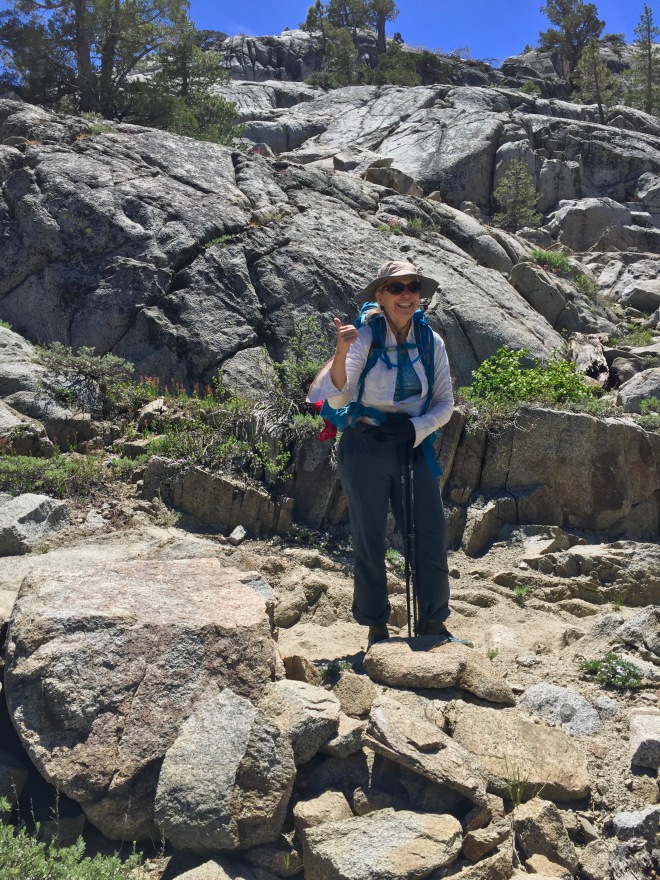 Barbara is the happiest camper!

The mosquitos got a bit much, so we reversed direction again to higher ground, and finally found a home for the night, on a high hump of glacier-smoothed granite not far off the trail but very secluded, with a few picturesque junipers and a view down to the river and up to surrounding peaks. It was our own little Shangri-La. I have found a perfect boulder backrest and am watching the day slowly fade while I scribble away. 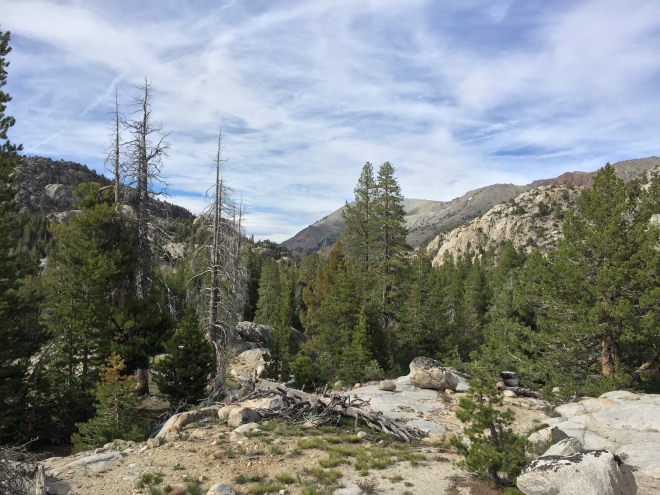 Pussy paws! Now I know we’re getting up there!

We met four of a group of nine men who had just spent five days camping. They had their equipment brought in by pack horses, and just had to carry little knapsacks with snacks and cameras. It really sounded idyllic, until we saw where they were camped among the pines and mosquitos. I’d have hated that part of it! Aside from these four and the English sisters, we ran into three people we had met in the parking lot yesterday, and that was it for human interaction.

Tomorrow, we will go exploring and leave our packs behind. Piute Meadows, here we come!

It looks like some clouds are closing in, but they don’t appear to be menacing.