I slept really well! Woke up at about 4:30, and then slept again until 6:30. The day is clear and perfect. The sun hit our camp after a couple of hours. We have the morning to laze around, dry out our clothes, take a swim, and then hike down to Bearpaw Meadows. I am so sad to leave the high country, but the silver lining is being able to sleep again. I guess… 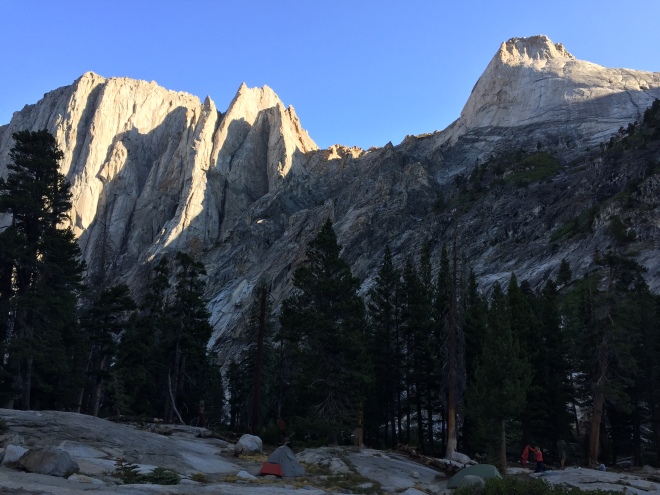 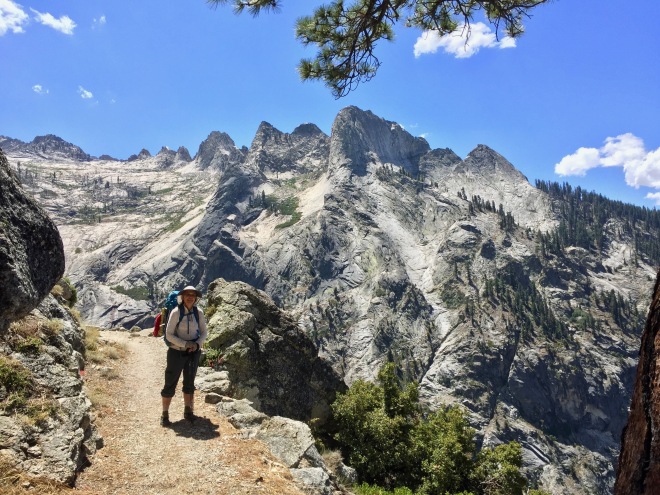 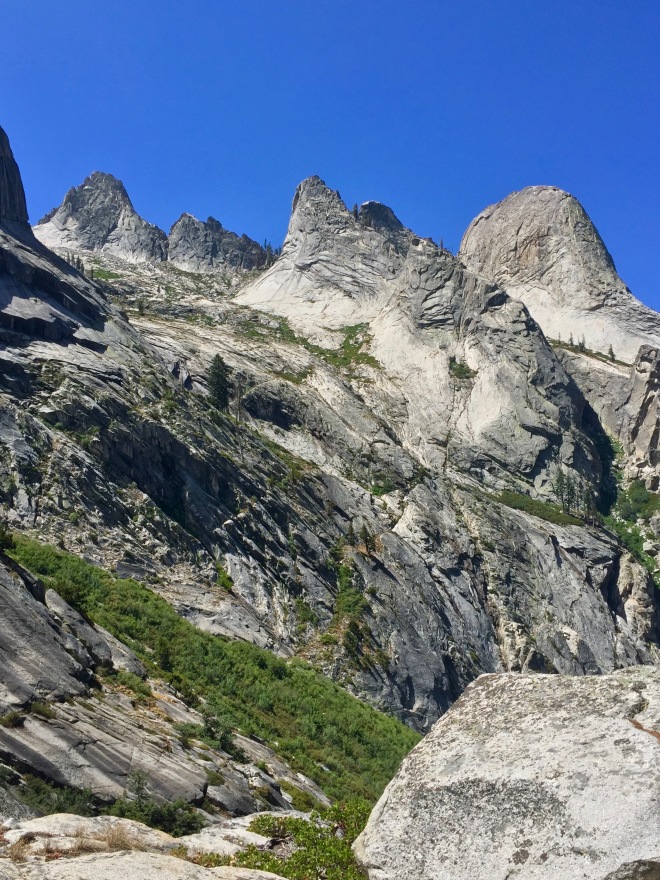 It’s been an eventful day. This morning, while entering the lake for a swim, Barbara slipped and fell. She caught herself with her left hand, which tweaked her wrist pretty badly. We had just enough first aid tape to tape the wrist, and she says it feels a lot better. So we got to use our first aid supplies! Two kinds of tape, and the little knife.

The view from the bridge over Middle Kaweah River 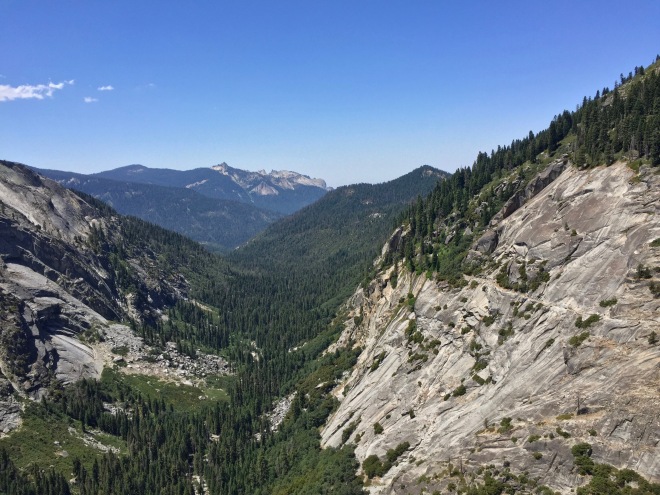 Looking down Middle Kaweah Valley. The High Sierra Trail (on right side) is a masterpiece of trail engineering. 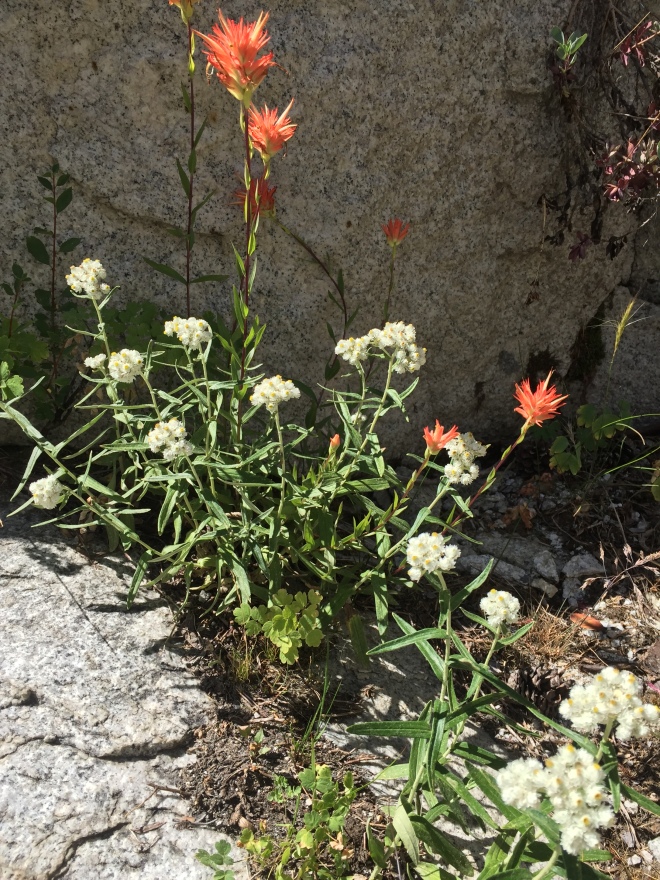 Looking up toward Elizabeth Pass.

Absolutely stunning views along the High Sierra Trail! I was thinking all the way to Bearpaw that I would ask if there are any cancellations for the High Sierra Camp there, so that I could bring Tom out here to see this incredible place. But when we arrived, the High Sierra Camp was just wooden skeleton buildings. Turns out that it never opened last year because it was such a big snow year, and this year  it didn’t open because of COVID-19. So another little dream bites the dust. 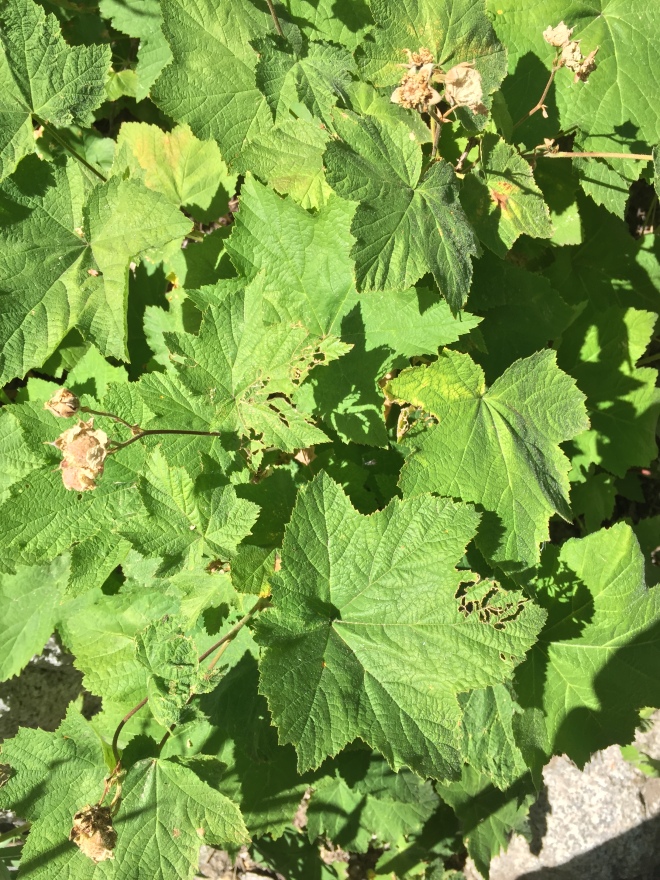 We were too late for the thimbleberries this year.

The scent of horsemint woke up our slumbering senses. 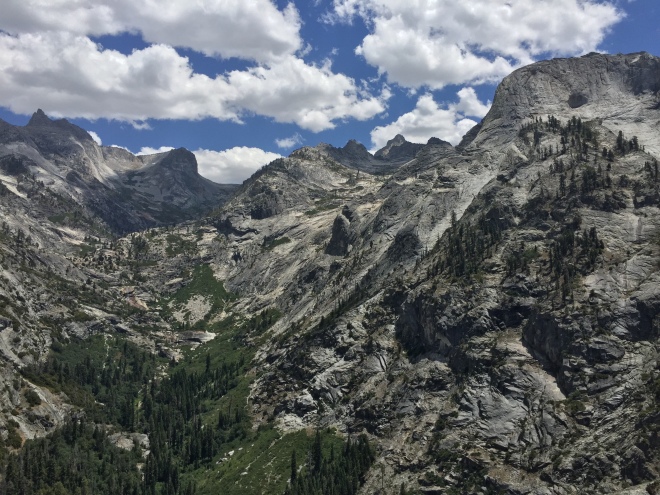 We are soon to be at the bottom of this valley, crossing over the river coming from Hamilton Lake, and then the creek leading from the backside of Eagle Scout Peak. Farewell to the High Country!

B and I spent awhile talking to the ranger at Bearpaw. She thought we should move on to Granite Creek, which is still quite a ways down the trail. As we left Bearpaw, we left the popular High Sierra Trail and started down a trail that I think nobody had walked yet today. It was such a quiet, shady, peaceful trail, down, down, and down to the lowest elevation on our trip. That’s where we are now, and it’s idyllic. Or it was, until a group of 10 hikers showed up and said they were supposed to camp there. There was obviously not enough room for 10 people, let alone 12, counting us. We were puzzling what to do, and decided we’d move on to help make room for them (even though there was no water for miles in our direction). The leader said no, they would go on to Middle Kaweah River, about 1.5 miles farther down the trail, since they couldn’t all fit there anyway. The group seemed so ill-equipped for such a long day. It was their first day out, and they had already hiked from Mineral King over Timber Gap and through Redwood Meadows, where the ranger told them there wasn’t any water and they needed to move on to Granite Creek. That’s a 12-mile first day, with at least one person carrying a 45-pound pack. Barbara referred to then as the Donner Party. I felt very guilty for having this spacious (for two people) campsite. And yet, relieved, because we were tuckered out. 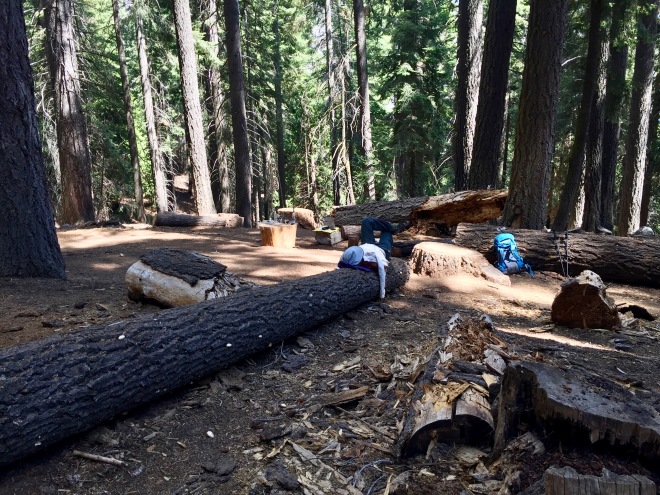 The deserted campgrounds at Bearpaw Meadows

We had stopped at Bearpaw Meadows backpacking camp for our hot meal earlier in the day. It was really strange, as the entire campground was totally deserted. We were the only ones there. At one point, as I started to stretch out on a log for a rest, I heard a rustling and looked up to see a young black bear hurrying through the meadow, probably on the heels of his mom, who was somewhere ahead in the trees.

We descended from Bearpaw through beautiful oak and madrone forests, down to 6100′ elevation. Such a change of scenery! We were enthralled, rather than being disappointed, as I had anticipated upon leaving the high country. Tomorrow morning, we will be in a Sequoia grove, which we are really looking forward to. I had just been reading about John Muir’s trek to this area to document the Sequoia groves. He said that there was a wide swath of the trees, from a mile to three miles wide, stretching all the way from what is now Grant Grove in Kings Canyon National Park down through the very area we are in now. He had written his dispatch from the Middle Kaweah River, which we had just crossed a couple of hours ago. All along the trail, I was imagining coming around a bend and seeing the giant broccoli tops of Sequoias rising before us. It hasn’t happened yet, but maybe tomorrow. 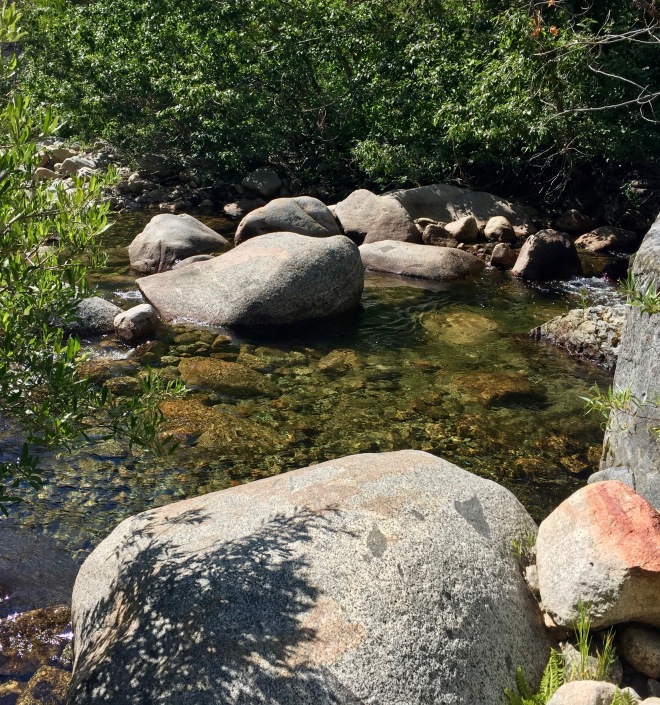 Today, we immersed ourselves in every body of water we crossed: the Middle Kaweah,  Eagle Scout Creek, and Granite Creek. Every time, we were completely alone, and so we dunked au naturel. I’m so glad those ten people didn’t happen by any of those times. We seem to be blessed with good timing. Nothing wakes up one’s senses and refreshes one like a dip in a cold mountain river!

A clear, cold hot-tub-sized pool in Eagle Scout Creek called to us. We had to answer the call.

Looking downstream from the bridge over Granite Creek. It looks like an amazing swimming hole down there at the end of the chute, but there’s certainly no easy way to get there!

Our snug campsite at Granite Creek

B had a nose bleed in the middle of last night, while I slept the sleep of the dead. She was up dealing with that, and I guess finally got it under control. She said the inside of her tent looked like a murder scene. Poor thing! This evening, something stung my torso, and I momentarily imagined that I would get some sort of allergic reaction, but luckily I didn’t. It hurt like hell, though. Because we thought that someone else might want to show up  and share our camp, we placed our tents as close to each other as possible. I am so worried about that group.

My phone tells me we hiked 10.8 miles today. I hope I can sleep tonight.