This day, Barbara Higbie (sometimes referred to here as “B”) and I began a trip that i have wanted to do for a few years. First, I wanted to revisit the Nine Lakes Basin, which I first saw in 2017, on a solo hike. Second, I wanted to show B the magnificent country that we only glimpsed from our hike over Elizabeth Pass in 2016. And third, I just wanted to drive the Mineral King Road, a long dead-end mostly-paved path up the mountains to our jumping-off point. I love a new road under my wheels!

On the afternoon of July 20, B and I headed south the Fresno, and set up camp in the garden of our dear friend and mentor Pat Wolk. It’s about a 4-hour drive from Berkeley, and would give us a really good head-start for today’s hike. On the way down, we stopped for gas in Visalia, and people were not very good about wearing masks, so we kept our distance. The guy in front of me in line for the cashier was slow to leave, chatting up the pretty (masked) cashier, and wearing his mask around his Adam’s apple. He regaled her with such salient observations as, “Friends are just people who are getting ready to screw you over.” Happily, the cashier did not look impressed.

A granite spillway on Mineral King Road. Almost to the mountains!!!

We couldn’t sleep much (traffic noise from Herndon Ave all night), so we got an early start. By 6:30 AM we were on the road to Mineral King. The distance was something like 80 miles, and it took almost three hours! The road from Three Rivers to the trailhead took most of the time, as the average seed was about 10 mph. It wound up into the mountains from the foothills, and eventually entered Sequoia National Park, weaving past huge sequoia stumps around Atwell Mills and a scattering of spared middle-sized sequoia giants.

Sequoiadendron Giganteum, somehow spared by the axe and saw.

At the trailhead, we had to wrap the van in a huge tarp, in order to keep the marmots out of the engine compartment. Seems they like to chew on electrical wiring. I wonder if it might really be a plot to try and keep people from coming here—just one more thing to contend with. We were up for the challenge, though. And a nice man (Steve) offered to help us. Barbara immediately said “YES!” I don’t think I would have been so quick to accept help, but of course I was glad to have it, and he knew the ropes of tying up a car.

We posed for a picture in front of the freshly-wrapped van, ready to start the hike. 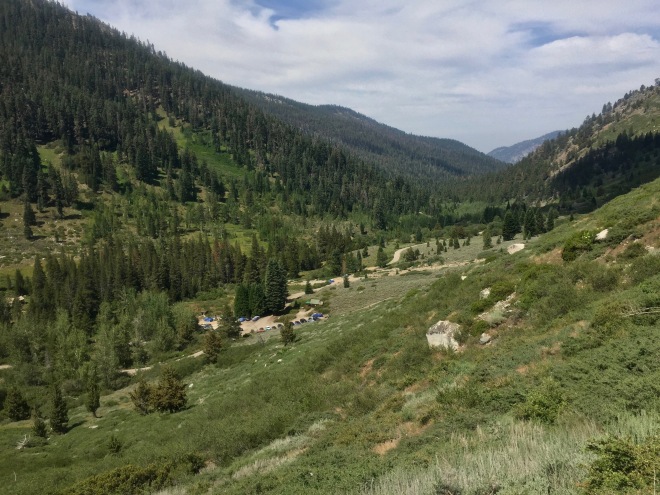 Looking down on the Mineral King parking lot. Lots of climbing today!

I think it was about 10:00 AM when we started up the trail to Monarch Lakes, our first destination. It was only about a 5-mile hike, but it really took everything out of me. Altitude sickness hit me hard, and I was just dragging myself along the trail most of the way. When we arrived, I was dizzy, nauseated, and my hips were aching with lactic acid buildup in the muscles. No matter how much I gulped, I couldn’t get enough air or water. It was so hard. But so beautiful. 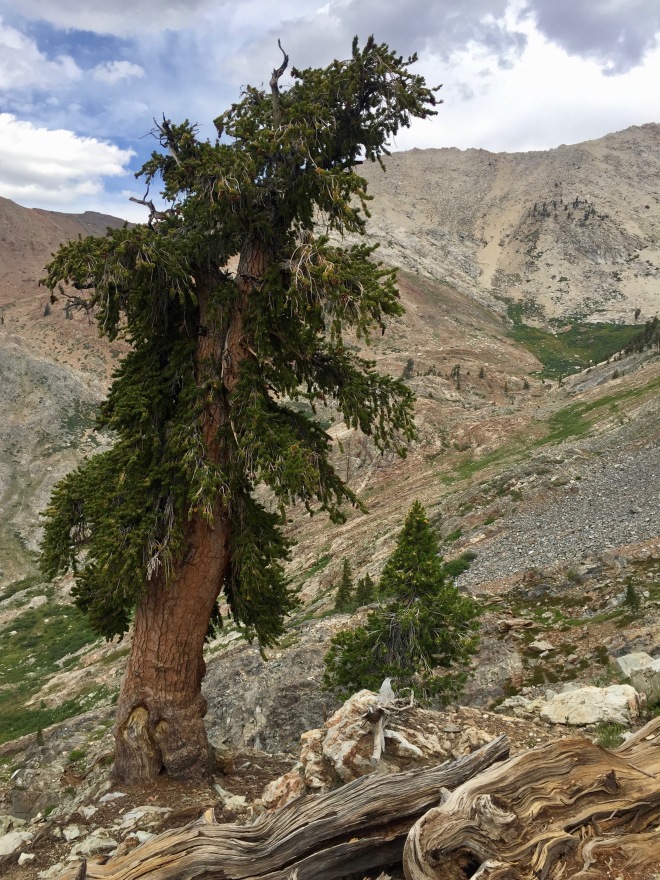 I dragged around camp, setting it up, while B fetched water and squeezed it through the purifier for me (much of our daily downtime is spent squeezing). Then I took a dip in Lower Monarch, and rinsed my salty hiking clothes, and began to feel quite a bit better. The lake wasn’t too cold, but I felt too punky to swim much. Tomorrow will be one of our most difficult days, hiking up and over Sawtooth Pass. On the way up to the lake today, we stopped to talk to a man on the trail. He said, “Let me give you a piece of advice. Do not go up Sawtooth Pass. Do not ever go up Sawtooth Pass.” You see, it’s very steep, and there is no real trail most of the way. There are myriad “trails” which people have tried, climbing through the granitic gravel, and it’s hard to ascertain which way to go. I was told, “Stay left as if you were going to Granite Pass (who the heck knows where that is?), and then cut right to the top of Sawtooth.” Okay.

Our camp at lower Monarch Lake. Turns out we set up in a wind tunnel, but it was turned off at the time and we didn’t know it.

Disappointed to not be able to see the comet Neowise. I felt for sure we’d have a good view, but the mountains formed a solid barrier to the north. Maybe better luck  tomorrow.

A marmot ate a hole in B’s pack, when she left it unattended for a few minutes. We need to keep everything in our tents tonight, and keep a close eye on our belongings. They will chew on anything salty or if they smell food.

I have been trying to eliminate plastic from my life, so we are experimenting with biodegradable, compostable food bags. It doesn’t work. They are way too delicate for the abuse they get on the trail, and this is only the first day! I think maybe I need to sew cloth bags, which will probably add weight to my back. 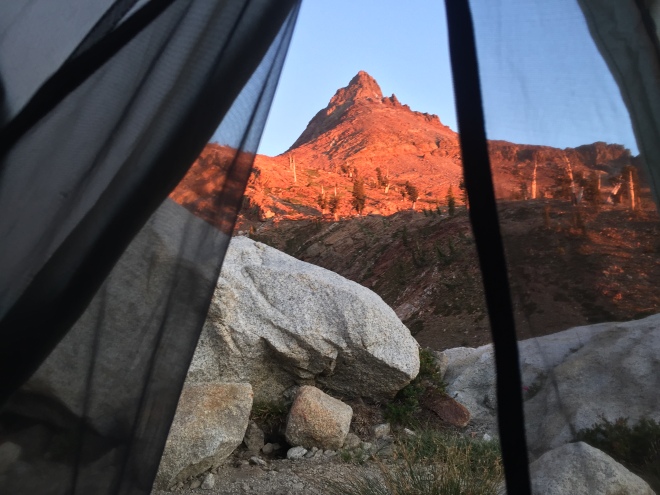 Alpenglow on the peaks, as seen from inside my tent.

9 thoughts on “An 8-Day Wander Through Wonder in SEKI”