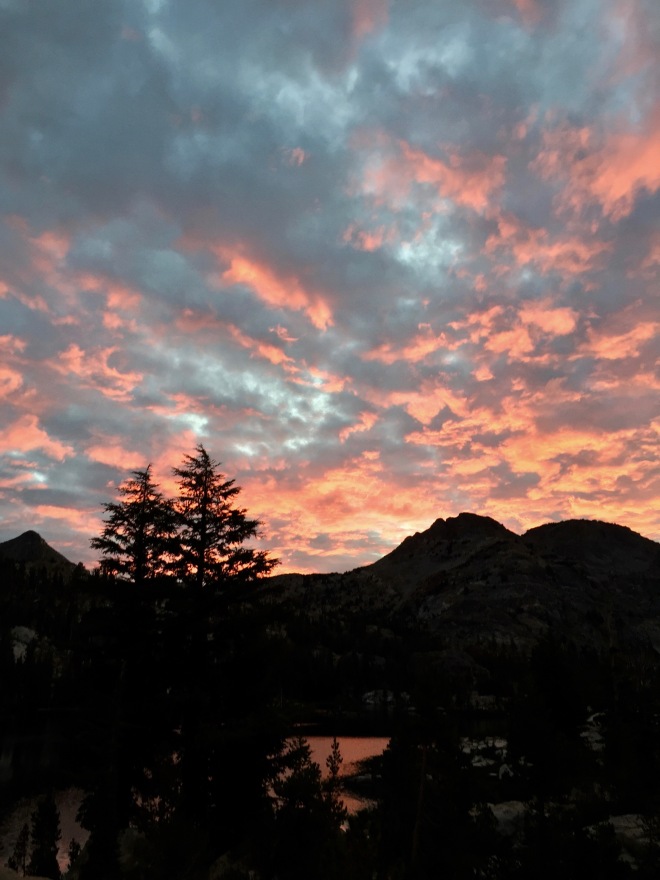 6:00 AM  I woke up to a stupendous dawn—brilliant red clouds above Petit and Regulation Peaks. Rushed out to get photos, and then it was gone. 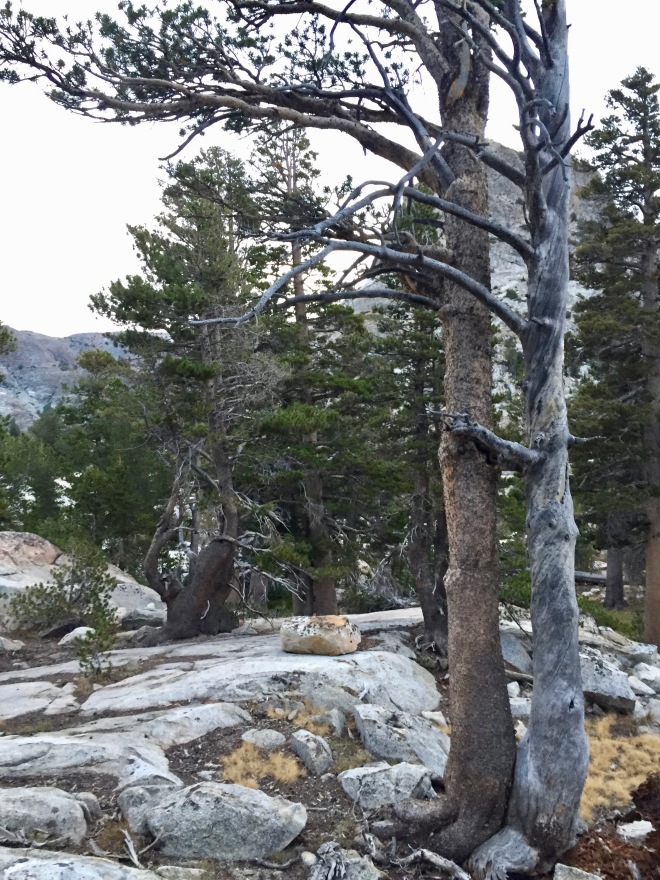 There’s something poignant, or creepy, about this live tree being embraced by the dead. “I am always with you, my darling.”

It started raining last night at about 2:30 AM. A strange, light rain that sounded like dry pine needles falling on my tent. When I got up to check it out, the tent was dry to the touch. A rain that gives no moisture. 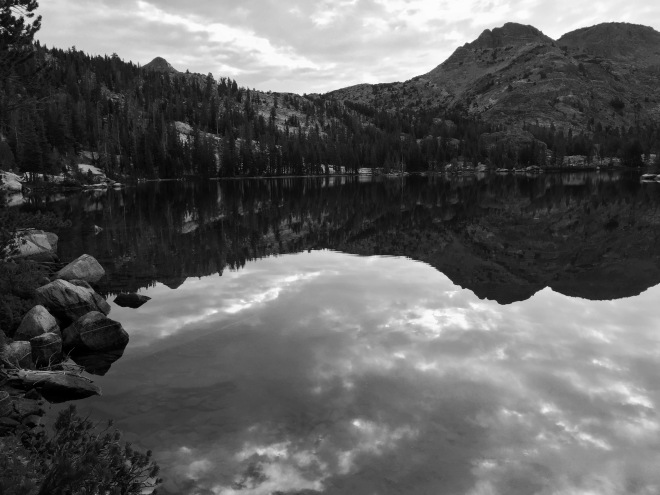 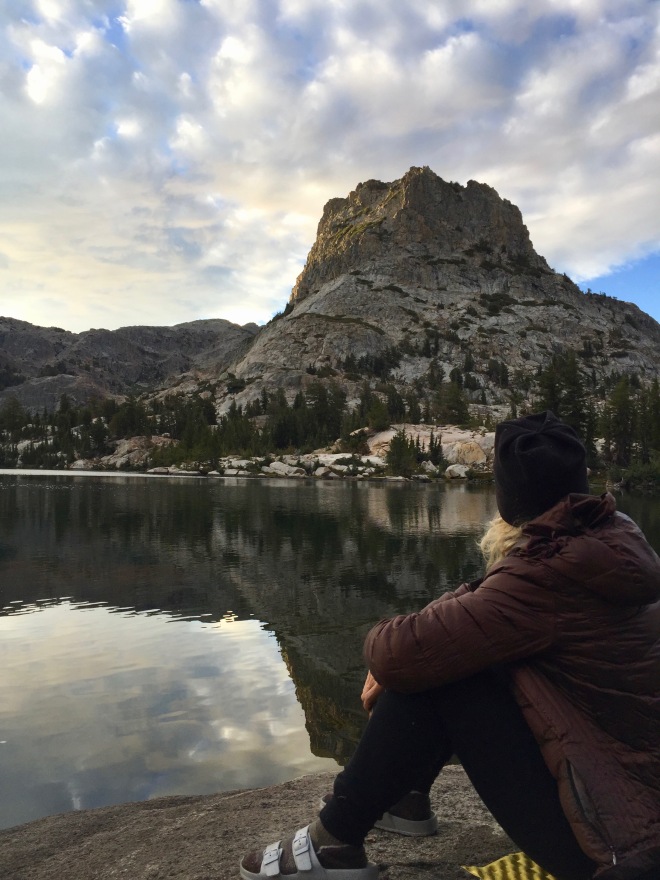 Now the clouds are turning pearly with the sun just hitting their eastern sides. Very Italian Renaissance. I had a restless sleep last night. Too dry, and for some reason, even though my tent site seemed level, I kept inching off the sleeping pads. 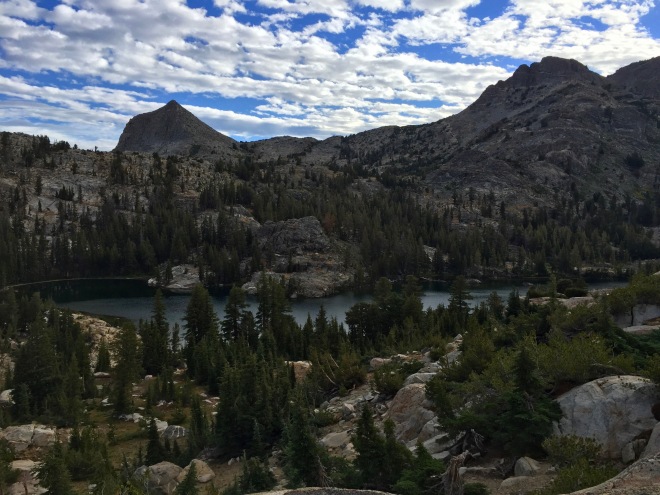 Volunteer Peak and Rodgers Lake, from the south side.

The granite “boat ramp” across the lake is where Barbara and I sat yesterday, when we first arrived at Rodgers Lake. 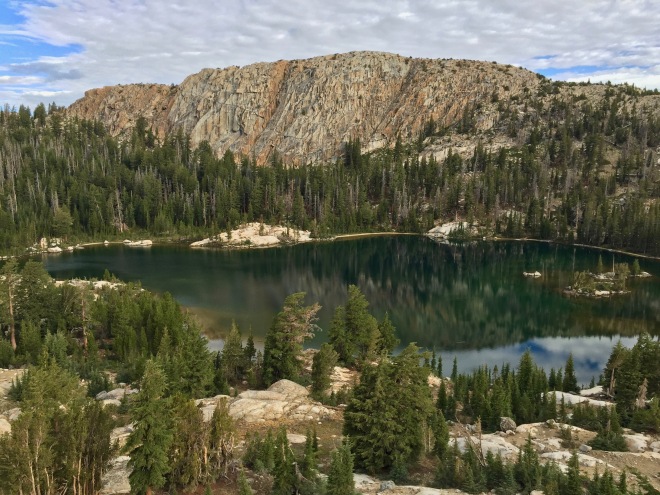 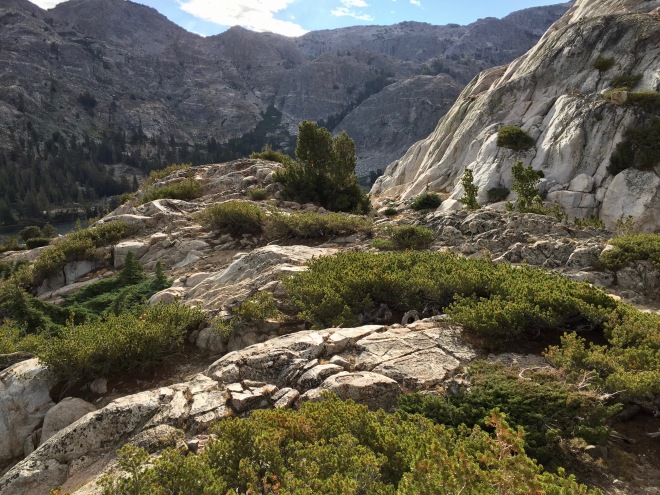 After breakfast, I took off to explore, and ended up walking around the lake. It was challenging. No trail, and a few boulder fields to navigate.  It was great to see the changing light as the sun cleared the ridgeline. Barbara and I had decided that we didn’t need to leave this idyllic place until afternoon. Today, we plan a fairly short hike, all downhill. Much of the way around the lake, I was thinking, “If it gets more difficult, I can always turn around,” but then it looked like I was over halfway around, and I committed to keep going. For the first part of my circumnavigation, B and I communicated via yodels (I had taught her how to yodel on our last trek, and she was an excellent student), but after awhile I was too far away.

Near our campsite, I was stopped in my tracks by this weathered fallen tree.

The south side of the lake is a jumble of slides.

A piebald crazy quilt of rock.

The view from the east end of the lake.

I met up with B back around at our first resting place of yesterday, and we walked back to our rock and took a swim. It took a long time to commit to the water, as it’s pretty cold. But we’ve definitely been in colder water. I feel so wonderfully alive!

Neal Lake, under the escarpment of West Peak

On the shore of Neal Lake.

The only people we saw today were a pair of rangers out patrolling. We startled them at Neal Lake (they weren’t expecting people). It was fun to talk with them. He had been a ranger for eight years, stationed at Tuolumne Meadows, and she was assigned to the toll booth at Tioga Pass. They asked us whether we had a bear canister, and we said yes, we had one, and that we were out for eight days. He said, “You can’t carry eight days’-worth of food for two people in one Bear Vault.” We insisted that we could. More on that point later…

I think B was influenced by meeting up with the rangers.

The stream which should meander through the meadow is dry, dry, dry…

Farewell to the high country! I feel better knowing that we will end the hike up high again, in Tuolumne Meadows. 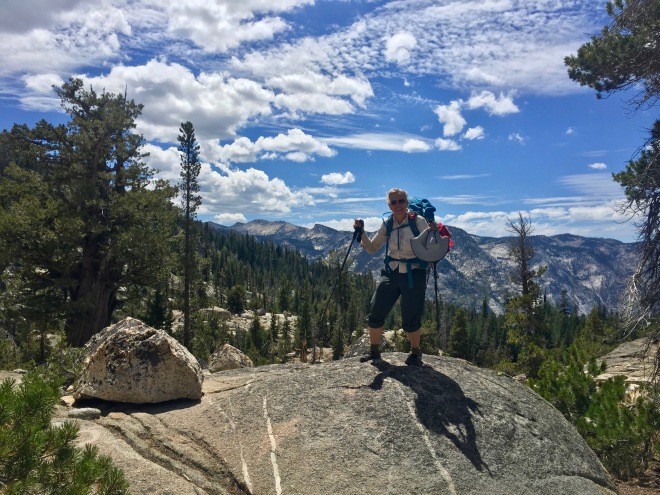 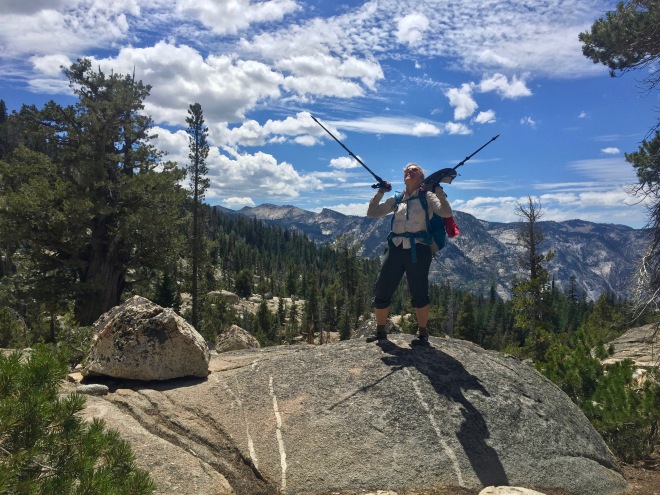 After Rodgers Canyon, we began to get vistas, and we could see where we were headed.

We are camped near the junction for the Pate Valley and Pleasant Valley trails. It’s a very hot day, and there is no shade in camp. No water. The streams shown on the map are all dry, except for one tiny trickle, for which we have to compete with the bees. But it would be another four miles to Pate Valley, and we’d rather not push it and just stay here.

Something new on the landscape: groves of aspen.

…and down toward Pate Valley

Just now, passing our campsite, we have seen a group of eight people hiking together, and also two young men, all hiking for four days (starting at Hetch Hetchy and ending in Tuolumne Meadows, where we started) and covering more ground than us, with much heavier packs. I don’t know…I would rather do without than carry all that stuff. My back has been really bothering me today. Everyone reported bears. We had seen plenty of sign (lots of scat), but no actual bears. Up here, they are timid black bears, and more likely to run away than cause any trouble (unless you threatened a cub somehow). We had walked a little further down the trail to where the map shows that we cross the creek, as we were on a search for water. The stream wasn’t even a trickle, just a few bee-filled puddles. But it was so much cooler down there than at our camp, that we just laid down on the trail and enjoyed the shade, the slight breeze, and the rattle of aspen leaves, which sounded like water.

Our only shade in camp.

Our campsite is on a sage-y shelf of volcanic rock amid the granite, out of the trees and bugs. There’s a large granite boulder setting in the middle of it, with mortar holes attesting to the fact that people have found it to be a good place to stay for hundreds of years—if not thousands. In a wet year, or a formerly “normal” year, the stream would have flowed nearby, through a stand of aspen.

Evidence that our camp has been a popular spot for a long time.

We hiked back up to the stream where we had gotten water earlier, and it had completely stopped running by 6:00 PM. jUst puddles, but larger than below. We managed to salvage some water for tomorrow’s breakfast.

Tomorrow will be an easy day, down to Pate Valley, and our first chance at more water.  Then the Grand Canyon! The evening is totally clear, without a cloud anywhere. The sun has just set, at 7:30, behind Rancheria Mountain. It is too hot for my bag. I read to B about Konrad Lorenz’s observations of the mating habits of Siamese fighting fish and cichlids. Very interesting! And so very human. Or maybe we are just fishy.