End of the Trail

Early on the morning of July 4, 2015, Barbara and I rose from our warm sleeping bags in the chilly crepuscular light. We ate our final breakfast of oatmeal, tea, and dried fruit, broke our camp, and packed our bags. By about 6:30 we were on the trail to Giant Forest Museum and the shuttle bus that would take us to Visalia. I left our mostly-full gas canister for a young couple who were hiking to Mt Whitney. They had started to worry that they would run out of fuel, and I was glad to give them what we could.

The day broke slowly and beautifully over the Keawah Valley and on the high country all around us. The clouds were ever-changing along with the light and I couldn’t stop taking photos. 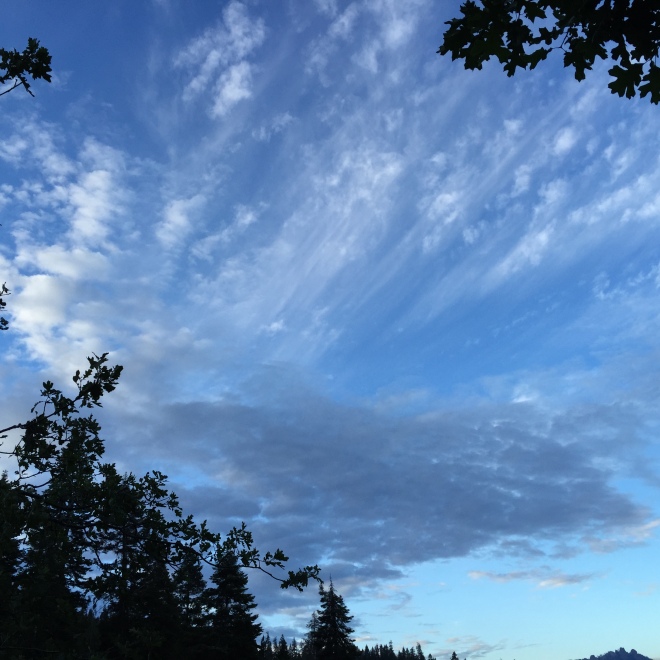 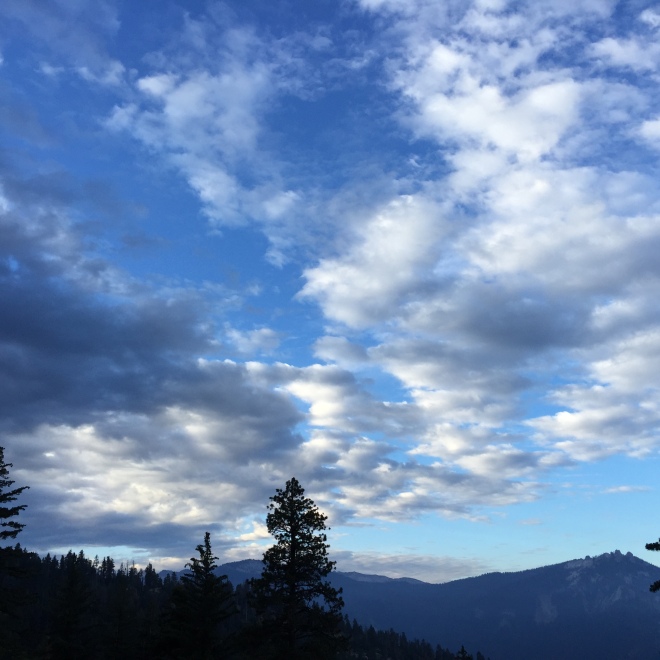 We hiked for a long time before seeing anyone else on the trail that early, and it was a great way to start our last day. Over the tops of the tallest pines in the distance, I saw the bushy tops of the Sequoia Gigantea, unmistakable in their broccoli-head fullness and their lighter green that distinguished them from the other trees over which they towered. I was excited by the prospect, not just of seeing them, but of watching Barbara experience them for the first time. 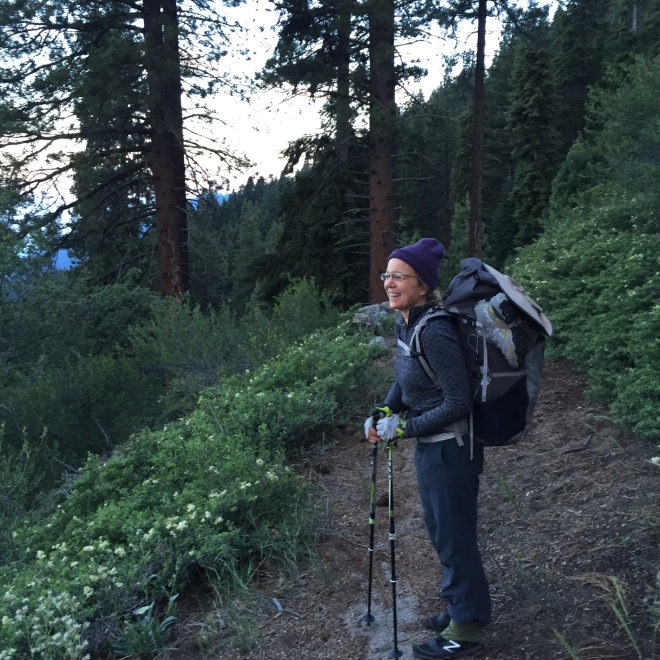 Babz, ready to hit the trail 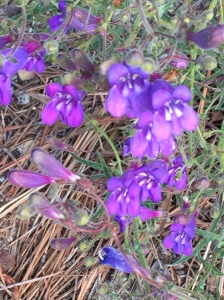 Flowers grew in profusion along the High Sierra Trail 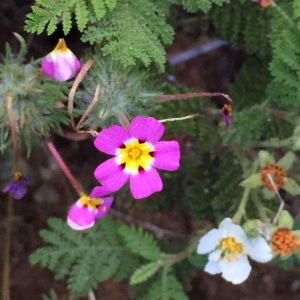 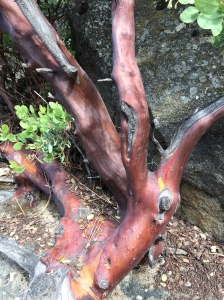 It was a bittersweet hike out of the mountains. As the day grew brighter, we could look down to the west in the direction we were headed and see a dark band of pollution hanging in the sky. I tried to keep my focus on the surrounding peaks, but there was no escaping our future 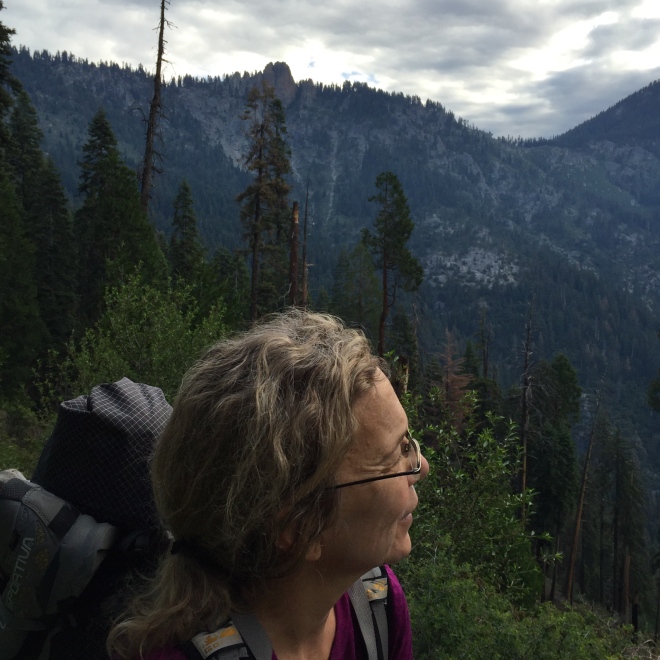 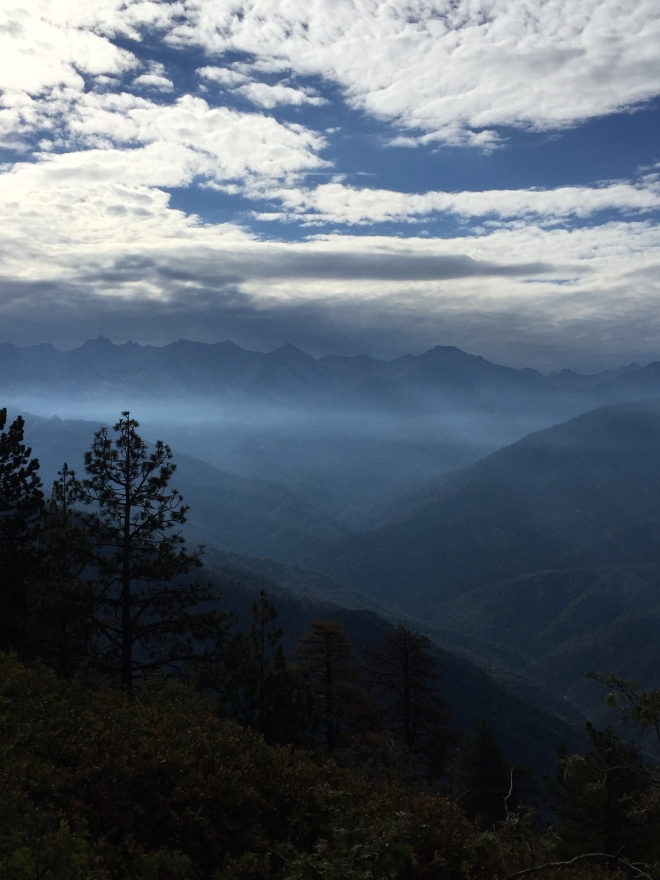 Civilization encroaches in the shape of a floating band of smog. 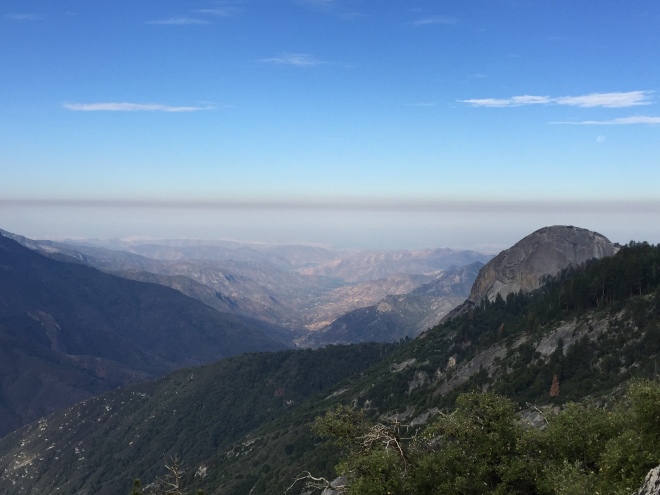 Looking west into the Central Valley. I want to turn around and go back over Elizabeth Pass. Well, maybe not…

Finally, and quite suddenly it seemed, we were among the Sequoias, and it was a beautiful sight. It was still early in the day, and the park visitors were scarce. We decided to forgo the free shuttle through the park and walk the extra mile or so to the Museum. We wandered through the Sequoias, stopping for photos and just enjoying the wonder of these giants. The Sequoia woodlands are particularly quiet, I think in part because the birds in the canopy are so far away. And every being seems to know not to raise one’s voice in church. 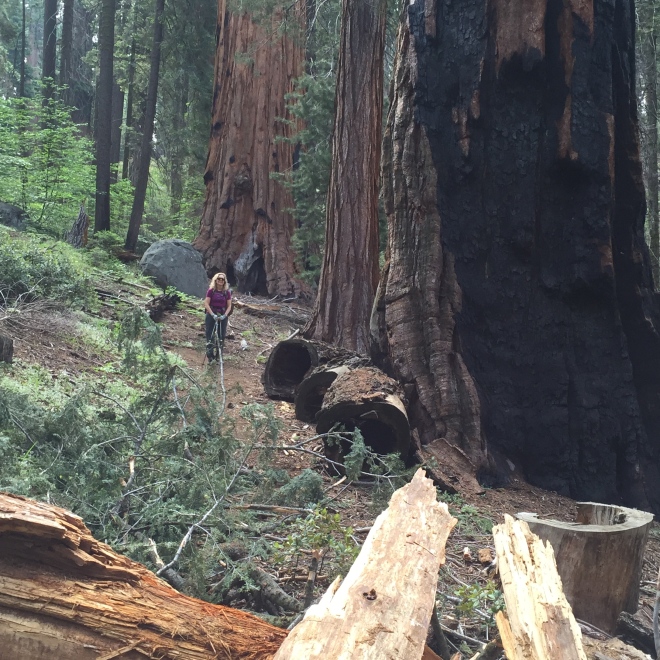 The Big Trees surrounded us.

Finally, we arrived at the museum, and were stunned by the number of visitors to Sequoia National Park. They lined up in droves for the shuttles to see General Sherman (the largest of the giants) and the other sights. So many different languages blending together! German, French, Chinese, Japanese, Norwegian (or maybe it was Danish), Spanish, and some I couldn’t recognize. There was a strong penchant for red, white and blue clothing, hats, earrings and necklaces. We joined them and took a shuttle to the lodge at Cedar Grove to find some lunch.

An actual seat! And a moving vehicle. How novel! 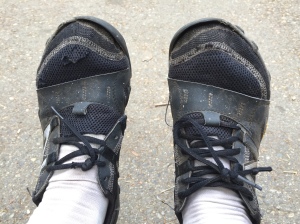 Close-up of Babz’s feet-saving shoes: New Balance Minimus trail runners. they’re a discarded pair of mine that she brought to use as water shoes and around-camp wear. Now they are REALLY worn out!

Lunch wasn’t as exciting as I thought it would be. Not much of a step up from our particular MRE’s. But honey in my tea was a real treat! 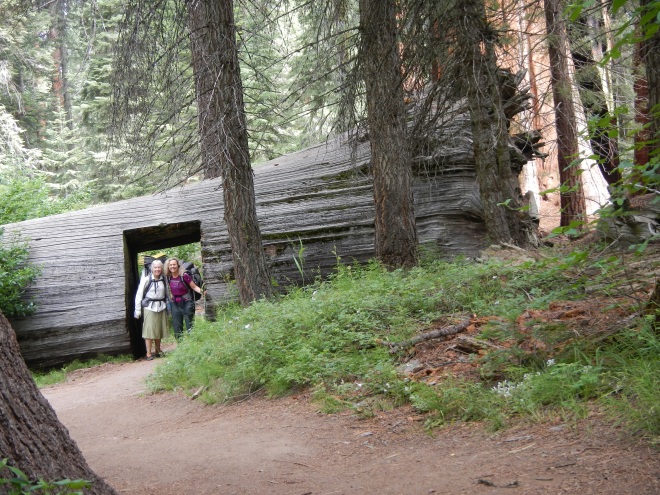 Goodbye to the trail. We turn around, and walk through the tree trunk into the reality of 21st century living.

I am happy to say that Barbara is now a backpacking convert, and even through our travails her spirit and love of the trail remained bright and alive. Whew! I was so afraid that I might have killed it with an excess of nature’s bounty. The most eventful part of our trip home was our ride from Visalia to Fresno with a talkative Uber driver. I keep getting flashbacks of the trail over Elizabeth Pass. What an amazing place we have been! I feel so lucky!