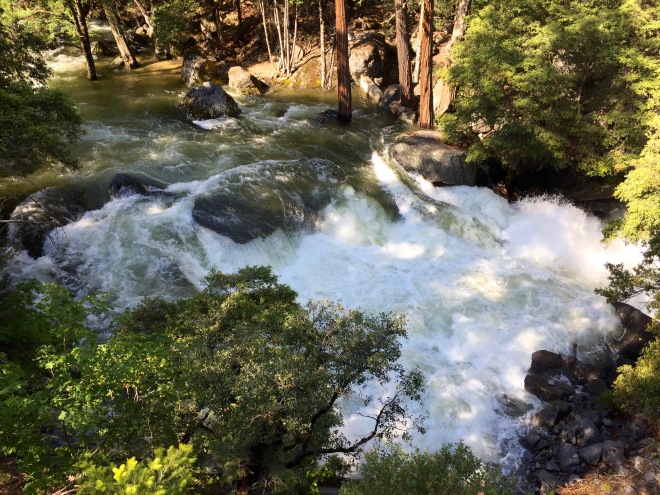 The Merced River at Happy Isles

It’s about 6:00 PM. I have a nice, flat, sandy campsite by Illilouette Creek, which is more like a raging river. It is really full, running fast and furious and rising. I started out this morning by about 7:00 AM I think, stopped at the car to get my forgotten toiletries, and started the uphill climb. I realized today that it is the month of my 50th anniversary of the first time that I hiked up the Mist Trail alongside Vernal and Nevada Falls. That time, I was 16 years old and on my way to camp in Little Yosemite Valley and from there up to Half Dome, with my sister Kristin and friend Mike McCarthy. That was my first backpacking trip, and I was completely exhausted and had no stamina. And on that trip, I received a valuable piece of information from a man who I remember as looking like the quintessential Sierra Club member of the time, wearing green and khaki, with a red backpack and big hiking boots. He was probably in his 40’s and to this 16-year-old looked really old. He stopped and said, “Always take two steps where one will do,” meaning small steady steps on a climb are less wearing on the legs than trying to pull oneself up big steps. I have found this to be absolutely true over the years, and thank him, wherever he is, for having taken the time to stop and teach a novice. On this ascent, I just steadily trudged up the trail, and felt pretty good about it. Somewhere, I have a photo that Mike took of the younger me, sitting on a rock beside the trail, looking utterly wasted. I’ll have to hunt it up and post it. 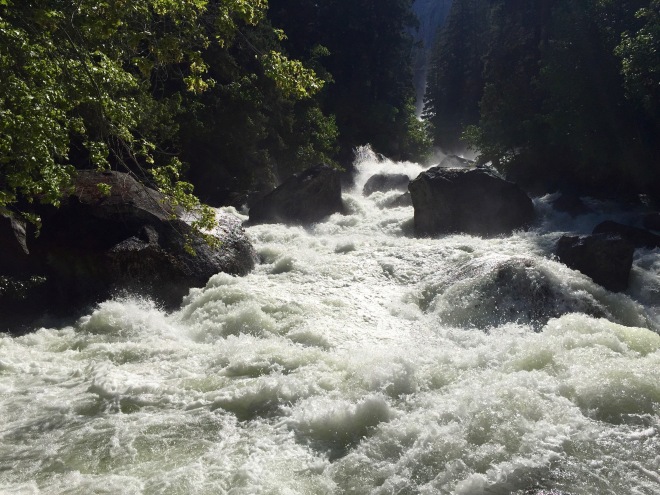 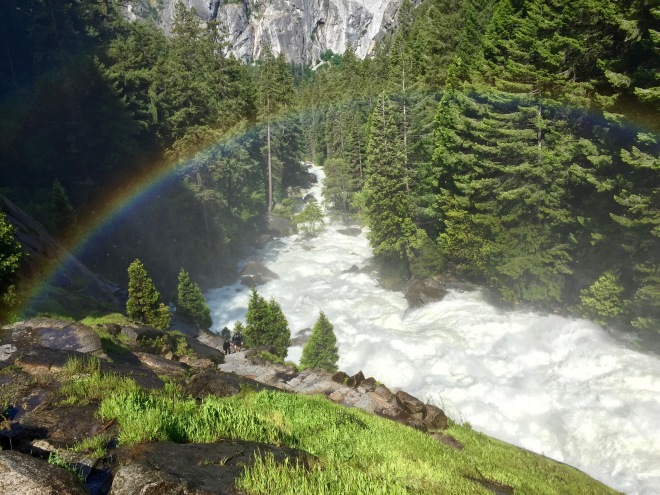 Looking back down the Merced, from below Vernal Falls on the Mist Trail. 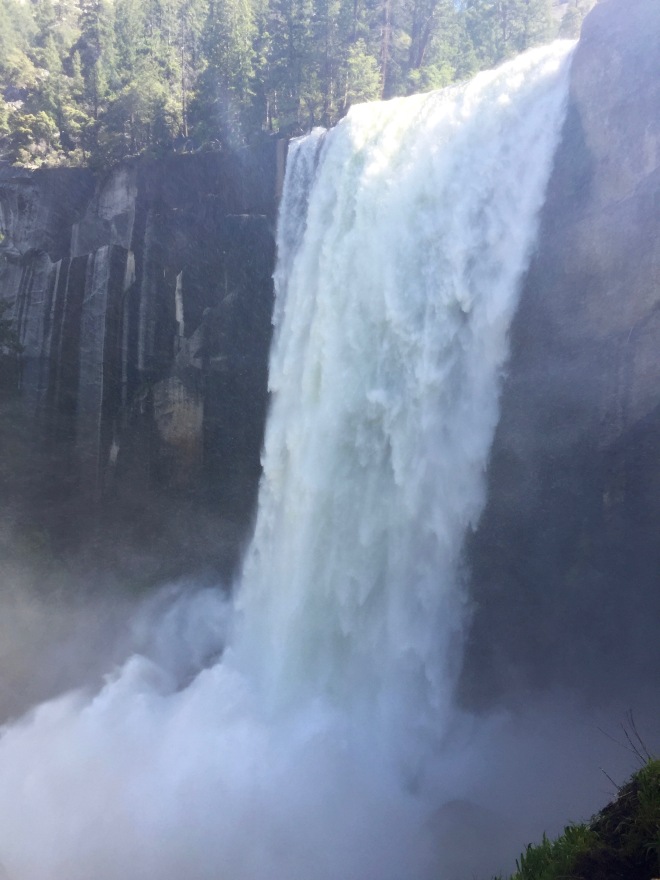 Thundering Vernal Falls, looking like a painting through the mist. 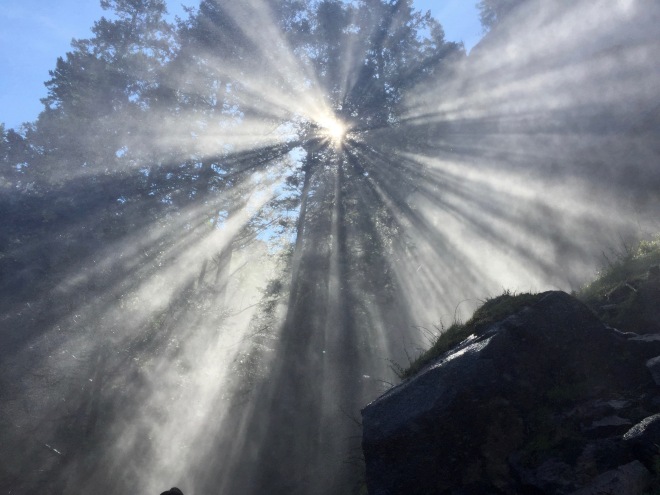 Looking up through the trees, on the aptly-named Mist Trail. It was warm enough that the cooling mist was quite welcome. 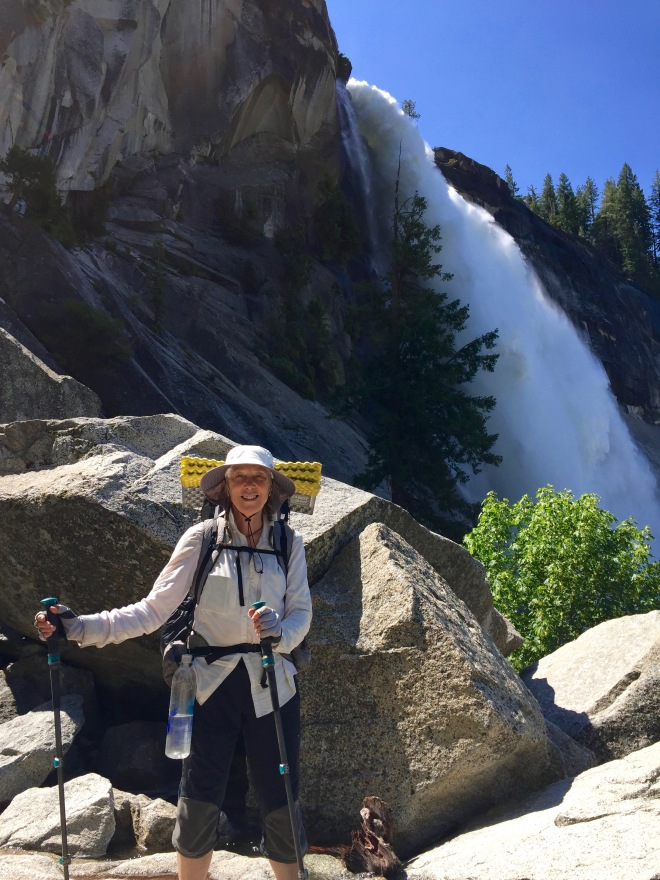 Nevada Falls, which claimed my lovely little pocket knife two years ago. I still miss it. 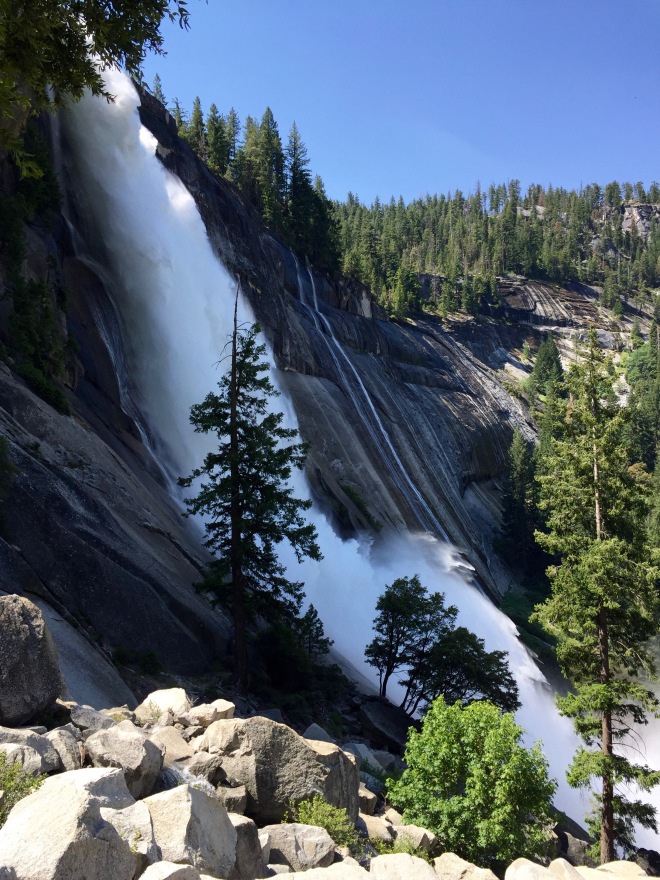 Nevada Falls again, without the human blocking the view. 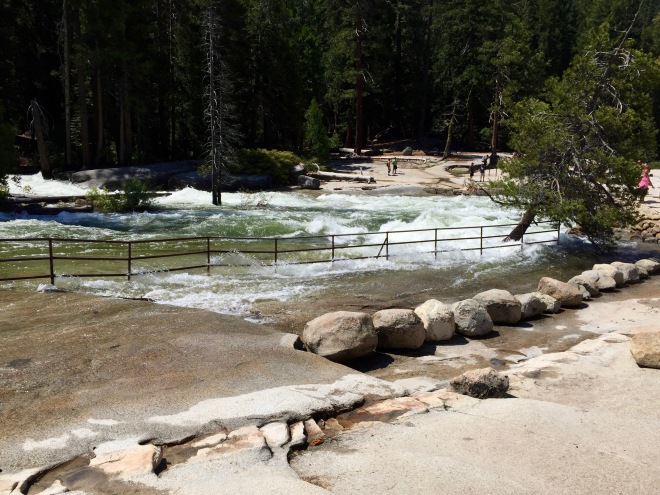 Finally, the top of Nevada Falls, where the Merced was overflowing its banks. I don’t think we needed fences and signs to warn us of the dangers. 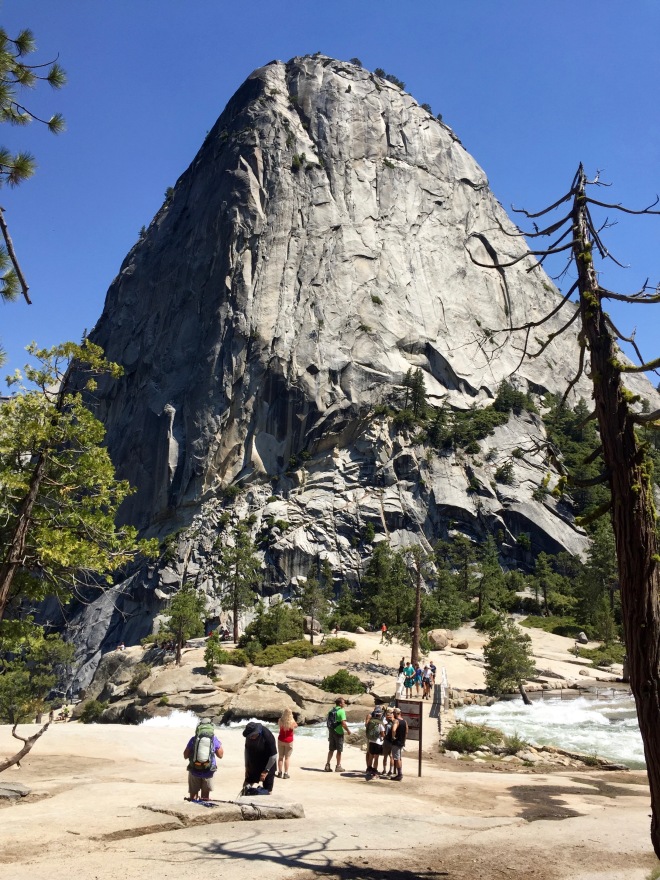 The top of Nevada Falls and Liberty Cap, where I stopped to dry my feet and have lunch. It was bustling with day hikers, and there was a happy, festive mood. 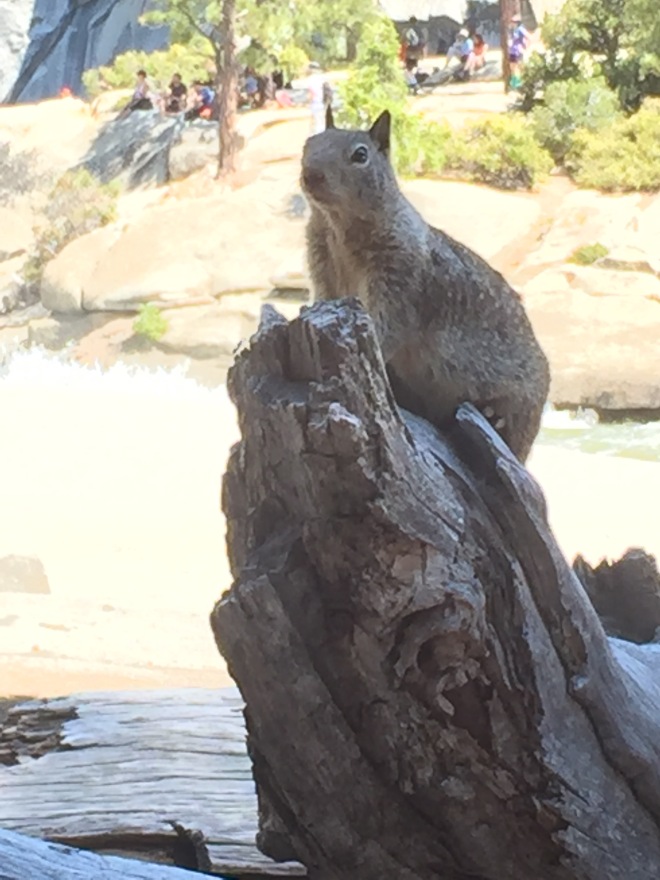 This guy wanted me to share my lunch. I didn’t.

I passed a couple heading up the Mist Trail who were planning on camping on Illilouette Creek as well. Miles farther along, at Illilouette bridge on the Panoramic Trail, where I had stopped for a little nap, they caught up with me. The man said he thought I was like a little rabbit hopping up the trail past them. That was then, though, and this rabbit was pretty tired out by the time I had reached the bridge. 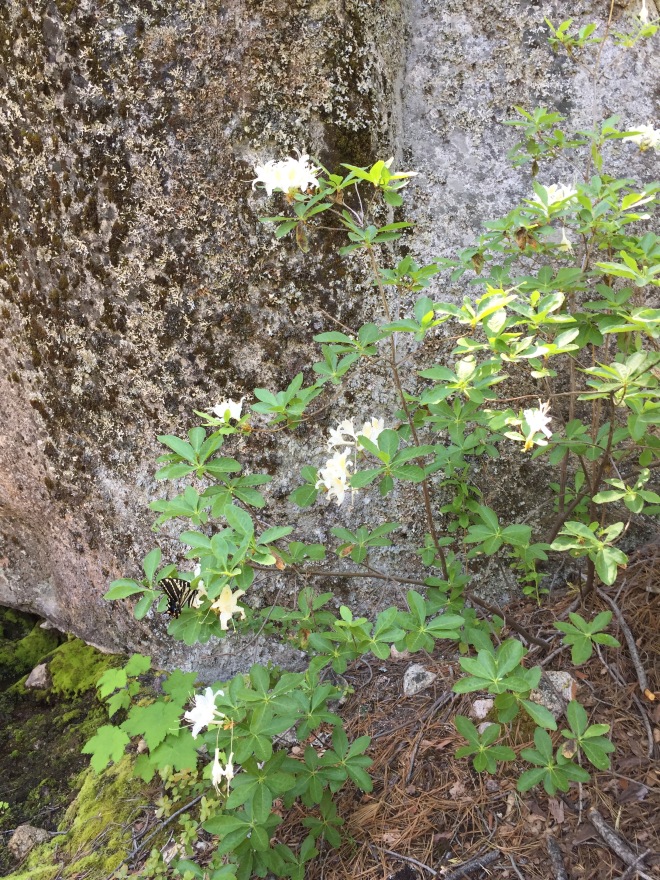 A swallowtail takes advantage of the many blooming azaleas along the trail. There were so many wildflowers everywhere! 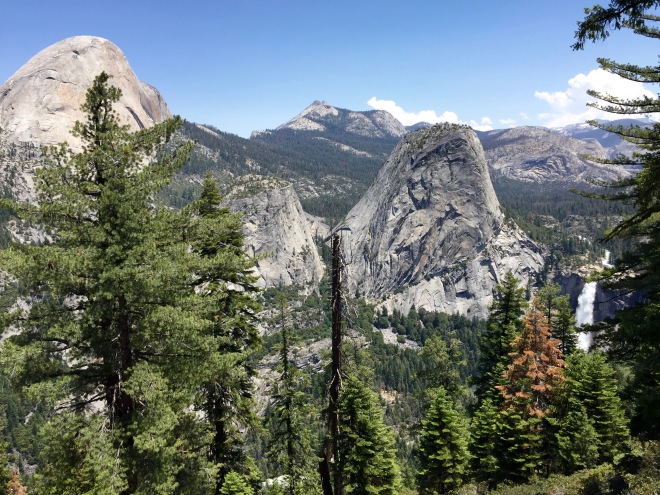 Looking back toward Nevada Falls from the Panoramic Trail, with the back of Half Dome on the left. 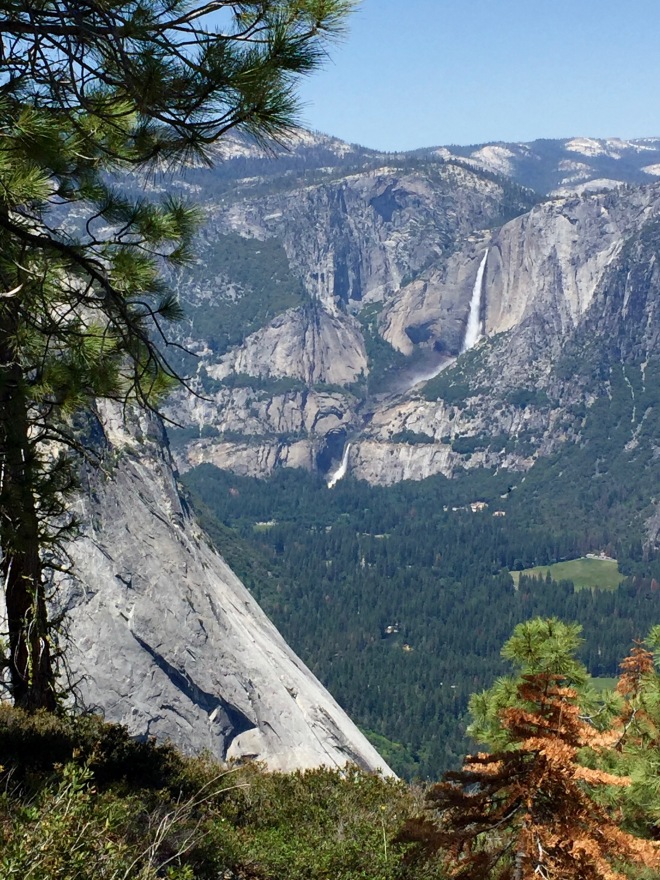 Across the valley, you could hear the thundering of Yosemite Falls. There were lots of dead and dying trees this year, the result of a perfect storm caused by years of drought and a beetle infestation. I heard a forester say that he expected a nearly 100% loss of pines between 5,000 and 7,000 feet elevation in the next few years.

Panorama along the Panoramic.

I passed the couple again on the way up the creek. When I got to a stream crossing, I stopped to figure out the best way to proceed. The stream was basically a boulder field with water running through it—very rough and steep. I went upstream a bit to see if there was a better way to cross, but it only got worse. So back I went to the original spot. I had just decided to go for it, figuring the water would only be maybe up to my thighs for a short while, and had taken my shoes off to keep them dry and go barefoot, when the couple showed up at the same place. I showed them the route I was planning on taking, and then shoved off into the stream, stepping carefully and taking my time on the slick rocks. Unfortunately, I slipped and in very, very slow motion fell backwards into the water, trying to stop my fall with my trekking poles and very nearly succeeding. I recovered quickly, and was up again and through to the other side. From there, I could see a little further downstream where the creek widened out and crossed a flat, ankle-deep gravel bar. Damn! That was obviously where I should have crossed. I felt like an idiot, especially because those people were watching me the whole time. The only consolation for my soaked pride was that they hadn’t seen the crossing, either. I pointed it out to them, and the woman crossed easily, The man took off his big hiking boots, and not wanting them to get wet, decided to throw them one at a time to his partner. The first one caught on a finger, though, and the throw went wild. The shoe arced spinning into the air and came down nearly mid-stream. The woman clambered after it, grabbing it just before it was swept into the Illilouette where it would have been lost. So much for keeping the boots dry! The second throw whizzed past my head while I was putting my shoes back on, and bounced off my pack. No harm done. He walked across uneventfully and put on his one wet and one dry boot. I took off again up the trail, through an old burn area that was coming back nicely, with lots of low currant bushes and chinquapin. The trail wound up away from the Illilouette, with beautiful views of river canyon and the swirling green waters. I walked off the trail after awhile to explore a ledge which I thought might have a good campsite. But there were so many fallen trees, and so many still standing, that it felt sort-of spooky and unsafe in there. And I kept thinking I heard voices, but couldn’t see any people. I decided to get back up to the trail and keep walking. 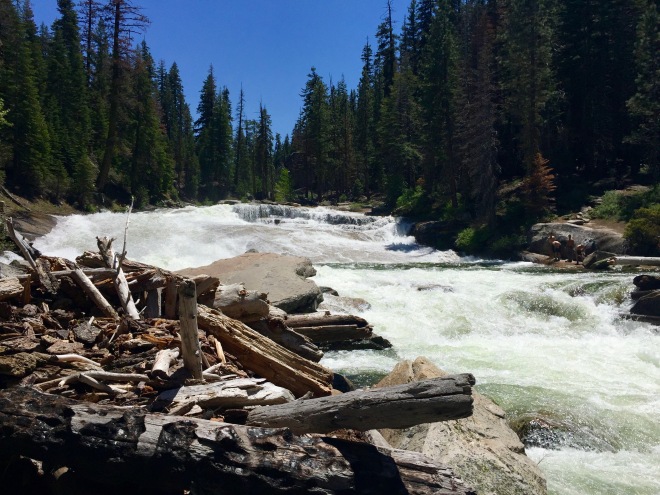 Illilouette “Creek” in flood stage. I’m thankful for a bridge! 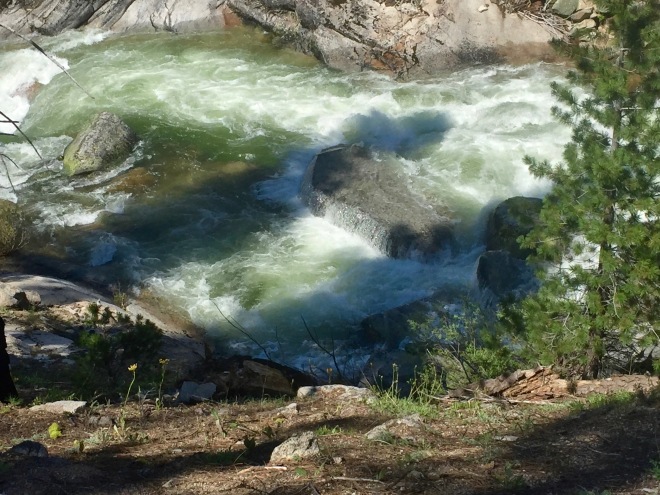 Farther up the Illilouette, the creek raged below me. 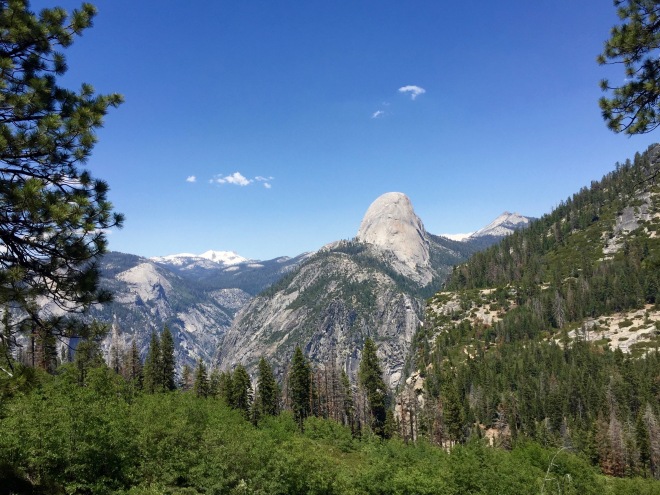 A last view of Half Dome before the trail winds out of sight.

Finally, I came to the designated camp sites along the river, and after searching about for a nice flat spot away from other people, I opted for the far end of the same sandy beach where a group of 7 people were camped. Easy access to the water, big flat granite boulders for drying my clothes after I rinsed out the sweat and dust of the day, and they seemed like a nice group, who left me alone.

It had been a pretty busy on the Panoramic Trail, and very busy on the Mist Trail. but when I turned off to go up Illilouette, I didn’t see anyone else on the trail, other than the couple. And now here I was away off in the “wilderness” next to a bunch of friends and family from southern California. It was a hard day. The map showed 9.5 miles, but my phone listed 15.7 miles. It felt much more like the latter, especially for the first day out, following a less-than-restful night’s sleep. Originally, I had intended to take a trail that cut over at a diagonal from near the top of Nevada Falls. It would have cut miles  off of the day, but would have required crossing Illilouette Creek to get to my first camping spot. I had been advised to go around and cross by the bridge, and I’m glad that I did. The Illilouette was huge and wild, and I doubt that I would have been able to cross safely, or even that I would have tried once I saw it. In the evening, at my campsite, though, I noticed a deer across the river. I turned back and continued to set up my camp, and the next time I looked up, that deer was on MY side of the river! Braver and stronger than me!

Off to sleep early tonight. 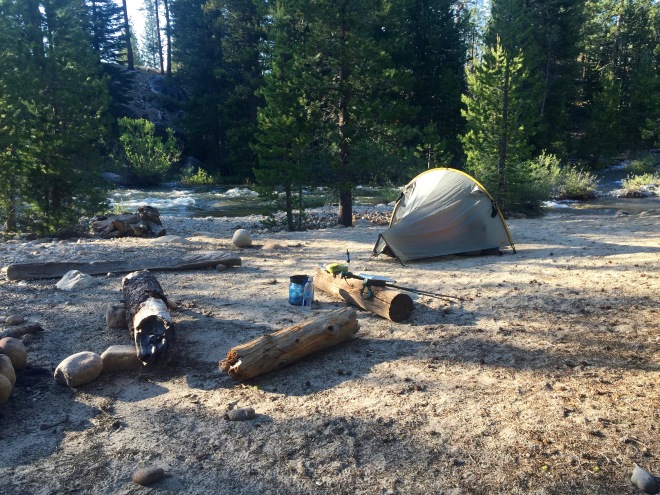 My comfy campsite beside the roaring Illilouette. 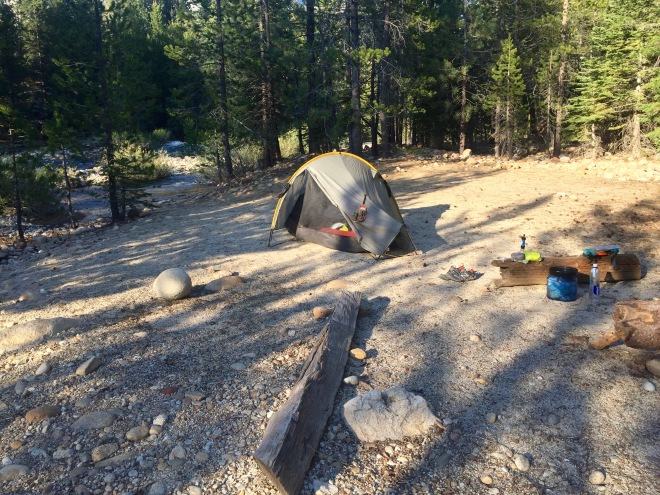