This is the first day of a planned 6-day solo backpacking trip along the hight Sierra Trailing Sequoia National Park. Last year, when Barbara Higbie and I hiked from Roads End to Crescent Meadow, we hit the High Sierra Trail for the last 14 miles of our trip. The views up toward Kaweah Gap were entrancing, and I decided right then that I would head up there this year, just to take a look around. Here’s what it looked like then: 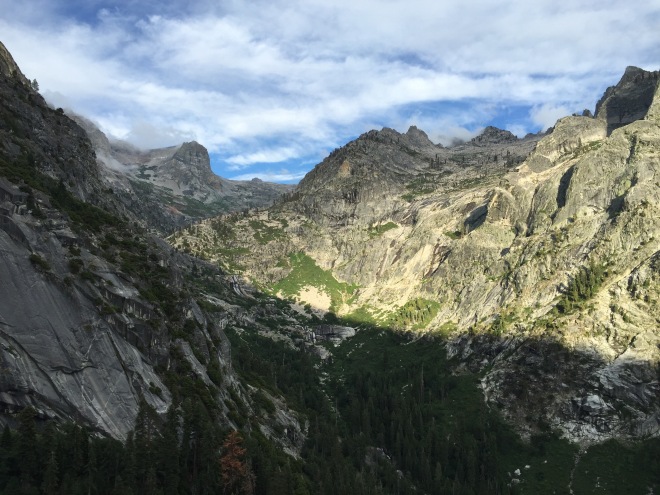 I managed to leave Berkeley at 2:45PM, surfing along at the front of the rush-hour traffic wave. Traffic was slow at first, but I still got up to Sequoia in five hours. I happily handed my senior pass to the ranger, and got my free 7-day sticker. There are some things about getting older that I just LOVE! For a one-time fee of $10, I now get in to every national park for free for the rest of my life! Plus, I get discounts in many state parks and campgrounds! By 8:00PM, all the stores and restaurants are closed up here, and I forgot to think about dinner. Luckily, I had half an avocado and some crackers, and that was enough to stave off hunger pangs until morning. When I backpack, my food is carefully rationed in advance, with each meal and snack accounted for, so that I don’t have to carry more than I need. But if I break into the stash before the trip starts, I chance coming out short at the end.

My plan was to just pull in to a campground for the night, and get my wilderness permit in the morning before I hit the trail. The first two campgrounds I passed were full and I started worrying about finding a place without backtracking and heading up on a side trip to Big Meadow. But then, the Dorst Campground loomed ahead, and there were spaces available. I pulled in, found a pretty nice site and pitched my tent in the dark, accompanied by the babble of voices from all the campers around me. There were lots of kids and more than a couple of foreign languages. There was also a campsite that had music cranked up, past the posted official noise cut-off time of 9:00 PM. That reminded me that I had neglected to bring earplugs. Generally, I don’t travel anywhere without them, so that I can deal with noisy air conditioning units, roommates who want to watch TV, noisy revelers in the hotel hallways, whatever might happen. But I hadn’t thought that I would need them in the wilderness. Granted, I wasn’t in the wilderness yet…

I had trouble filling my new inflatable sleeping pad, which had felt so very comfy (and super-lightweight) at REI. Either I don’t know the trick or it’s defective. We’ll find out, but I hope not at the expense of sleep. When I finish blowing it up, lots of air escapes before I can get the valve shut. I found that I actually had to put the entire valve in my mouth, and keep blowing while I tamped the valve into place with my tongue and the help of a finger. Sheesh!

Driving up, I was shocked by the quantity of standing dead and dying conifers. They stretched out as far as the eye could see, which wasn’t as far as I’d like, due to the smog rising from the Central Valley. On the way down, I listened to the weather report on a Sacramento station, and they consistently referred to the smog as “haze.” That seems so innocuous, and actually natural. I wish they would refer to it by what it actually is. Then maybe people would be more motivated to try and curtail it. I was talking to a very knowledgeable fellow last week about the dying-tree problem, and he said that the main cause of death was the weakening of the trees due to air pollution, and further weakening by drought, which makes them easily fall victim to beetle infestations, which finish them off. Generally, the trees fight the beetles by physically pushing them out with sap when they start to bore, but there’s not enough moisture for the sap to run freely. And the beetles, historically, were kept at bay by occasional fires (about every 15-20 years in most forests) and cold winters. The last 100 years of fire suppression coupled with climate change have done their job. Then the man said that some experts predict 100% conifer death in the band between 5,000 and 7,000 feet elevation. Oy. Here, at over 8,000 feet, the trees are looking pretty healthy, though it sure is dry.

With these thoughts, I will try and sleep. 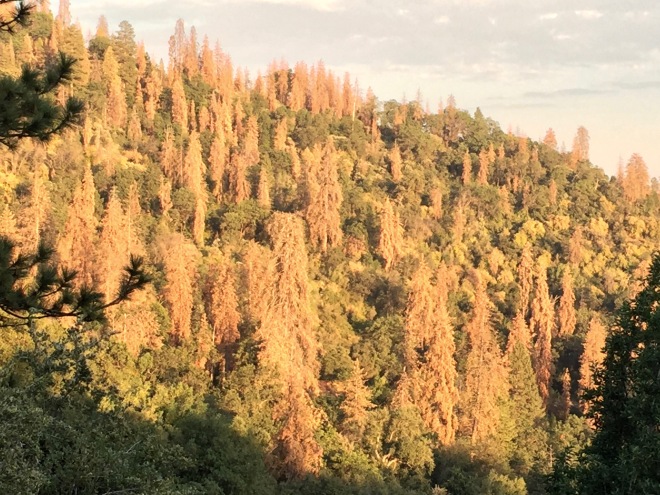 A hillside of mostly dead Ponderosa Pines greeted me as I drove up Hwy 180 from Fresno. The road winds through thousands upon thousands of dead and dying trees. Poor California!

2 thoughts on “The Walkabout”