Yosemite Falls, which a Valley bus driver proudly announced was the 5th highest waterfall in the world, reflected in the flooded valley floor. I looked it up, and it’s actually 20th on the list. But some of the others have very little volume, so maybe his list went by volume as well.

For my first outing of 2017, I had planned on a round-trip hike that would take in the Grand Canyon of the Tuolumne in June. I wanted to go early-ish in the season, to see all the waterfalls at their most glorious and wild. But as Fortune would have it, following this year’s record snowfall in the Sierra, the trails were still impassable in mid-June. Bridges had been wiped out by the floods, the Tioga Pass road had only been open a couple of days, and it was just not going to happen. So I cast about for some way to get into the Sierra without having to brave the very dangerous creek crossings and late-season snowy conditions. After consulting guide books and my personal oracles, I decided to visit Yosemite Valley, and hike the south side of the valley, starting at Happy Isles, going up past Vernal and Nevada Falls , along the Panoramic Trail to Glacier Point, and then continuing along the south rim to Wawona Tunnel and down through the Valley and back to the car. The advantage, for me, was that the trails would be clear of snow and for my first outing of the year, I wouldn’t be so alone.

Just one of the puzzling sights at this year’s bluegrass festival. 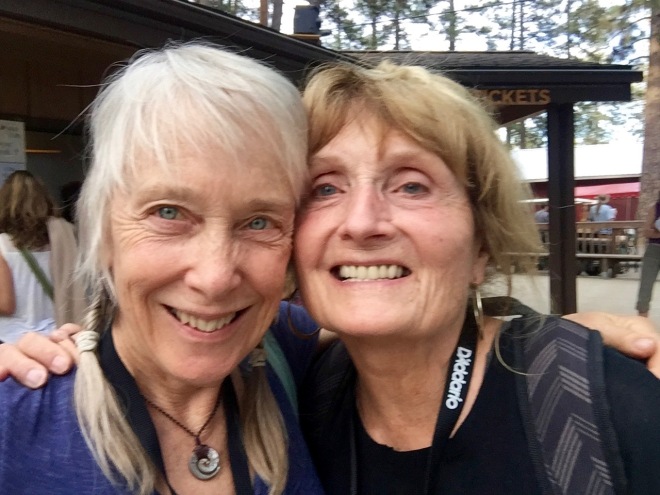 The week before, I had gotten the opportunity to hang out with one of my heroes, the great Alice Gerrard, at the California bluegrass Association’s Fathers’ Day Bluegrass Festival.

Sunsets were gorgeous, especially when adding my very musical friend Luke “Nandi” Forrest, to the shot.

I arrived in Yosemite Valley, straight from the Fathers Day Bluegrass Festival in Grass Valley, after driving the winding Highway 49 through the sere landscape of the California foothills.

Enroute to Yosemite, I watched the thunderclouds mass over the Sierra in the late afternoon.

In stark contrast, the Valley floor was flooded with Spring snow melt and rain, and the waterfalls were all pumping as I’d never seen them before!

I had picked up my backcountry permit just inside the park, and was told that I would need to hike the long way around to the backpackers’ campground, as there was flooding on the main entrance. Truly! The water was about up to my knees and it was impossible to see where the path might be. Off to the left, I saw a small group of backpacking tents, and I thought that might be the place I was looking for. There was one young man there, and I engaged him in conversation. It turned out that the tents belonged to a group of college researchers who were spending the summer studying recycling and waste in national parks. He pointed the way to the backpackers camp, but before I hit the water again, I asked if they might have room for one more little tent at their camp. He said, “Of course!” So I was able to save myself more wading and possibly getting lost, pitched my tent and made myself at home. I eventually met all four: Bo, Jeremiah, Montana and Mary. They were spending a month in Yosemite, followed by a month in Grand Tetons, and a month in Denali, working for the Leave No Trace Institute. Nice summer job!

A dry oasis in the flood.

The view from outside my tent in the morning.

I seem to have forgotten a number of important items: baking soda (for brushing teeth), dental floss, and my handy-dandy spork a cross between a spoon and a fork, which saves carrying both, but is less effective than either). Luckily, I think they are in the car, and it is parked near the trailhead. My gas canister was nearly empty. The stove lit and burned for a few seconds before it went out. Luckily, I had another full one. More bad planning, and I am relieved that the car is close by. I also forgot my water shoes, so I guess I will either be fording creeks in my hiking shoes or barefoot. Most likely the latter. That worked today, wading to camp.

For some reason, my right shoulder is hurting, as is my left hip. I think it’s from apprehension about the trip. The river is rising and very loud! Keeping me awake. Part of me wonders whether I will be flooded out of my tent before morning.

My mind is flooded with worries that I have been trying to keep at bay in the daylight hours. I am hoping that this solo saunter through the mountains will give me time to turn things over in my mind, and maybe hit on some plan of action. Or if not, at least give me some breathing room by myself. It doesn’t bode well, though, that I am not sleeping…

5 thoughts on “An Early-Season Walkabout”